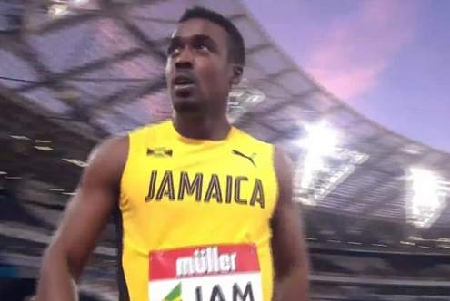 Tyquendo Tracey, the 25-year-old Jamaican athlete, is now numbered among an elite group of athletes from the country to run the 100-meter race under 10.00 seconds.

Tracey’s accomplishment came about after making the Muller Anniversary Games in London his own after breaking the 10-second barrier twice at the meet.

Tracey had earlier run a personal best 10.03 second at the same stadium to win the World Cup title.

His time in the heats makes him the joint 13th fastest Jamaican man ever with Raymond Stewart and Senoj-Jay Givans on the list led by World Record holder Usain Bolt with 9.58 seconds, set at the IAAF World Championships in Berlin in 2009.

Bolt owns the top three times ever run, 9.63 seconds set at the 2012 Olympic Games in London and 9.69 seconds done in 2008 while winning his first Olympic Games title in Beijing, China.

Powell’s best 9.72 seconds makes him fourth best ever while Yohan Blake’s 9.69 seconds set in Lausanne in 2012 makes him the joint second best ever over the 100m tied with American Tyson Gay.