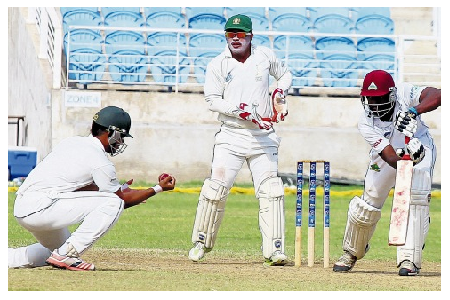 However, spinner Nikita Miller was masterful in covering the shortfall of the top order batting in a tight contest.

In the end, he led the bowling unit to ensure the Scorpions got their first win of the season thanks to a 30-run defeat of Windward Islands Volcanoes just before the close of day three at Sabina Park yesterday.

Miller, the slow left-arm orthodox bowler, claimed 5-46 to help dismiss the visitors for 145 after they were 126-4 in their second-innings chase of 176 for victory. The 33-year-old veteran ended with match figures of 9-113.

His second-innings knock of 39 was also crucial in helping the hosts from an embarrassing 25-7 to their eventual total of 128.

The outcome represents a maiden victory for rookie Captain Paul Palmer, who lost to Barbados Pride in last week’s first round on his debut for the franchise. For the Volcanoes, it was their second loss in as many outings in the new campaign.

The Scorpions skipper, who is yet to reach double figures as a batsman this season, told reporters he was grateful for the win, but conceded the team’s batting remained an area of concern.

“After a win you are going to be happy, but you know there is work to be done (as we) didn’t produce the goods,” Palmer said at the end of the match.

His opposite number Liam Sebastien rued the fact that his team let the Scorpions off the hook in the field and again when batting.

“We lost the game by 30 runs, but it was due to our own doing. Chasing [176] we were in a comfortable position and we let it slip,” the Volcanoes captain lamented.