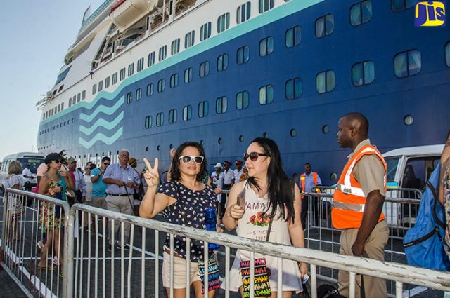 Jamaica’s Minister of Tourism, Hon. Edmund Bartlett was upbeat about the arrival of six cruise vessels to the island recently and opined that there are bigger things to come. He also noted that the country is on track for a record winter season.

In an interview with JIS News, Mr. Bartlett reportedly said that Jamaica record haul of so many ships for a day was worthy of applaud.

“I can tell you that based on the demands that are coming our way, it is just a matter of time before we start getting more record hauls,” Mr. Bartlett declared.

He further said, “We will now have to seriously look at the possibility for more berthing spaces at the ports, especially to accommodate the mega liners and the Oasis-class luxury vessels.”

“The PAJ has announced plans to expand and renovate the Reynolds Pier in Ocho Rios. The agency will also be doing the same at the Port of Montego Bay, where its master plan to bring the facility up to major First-World standard is about to commence. At this rate, Jamaica is certainly on course to be the number-one port of call in the region,” he reportedly added.

Additionally, the minister gave thumbs up to the arrival of a cruise ship to Kingston, the first time in years. He noted that this is just the beginning of great things to come as Kingston has its own unique attractions that visitors will find appealing.

Further, he reminded the audience that Port Antonio which lies at the eastern end of the island is also poised to receive some of the smaller boutique ships.

“Discussions are far advanced to ensure that Port Antonio also gets its fair share of the pie. The larger vessels cannot dock there, but we have some of those boutique ships that are tailor-made for that kind of market,” the Minister explained.