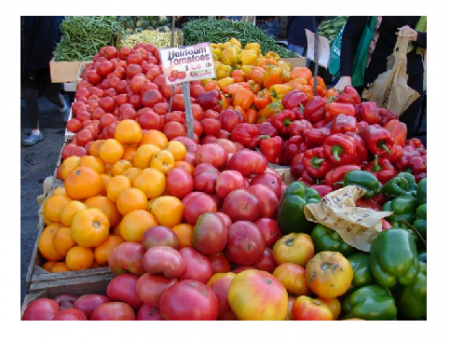 We have come a long way from the village square where subsistence farmers traded and haggled, trying to unload all their produce before the sun set on the market place. Big spacious buildings with temperature control rooms for commodities and traders have replaced the seemingly disorganized, garbage littered square, and though there is the robust interaction of buyers and sellers, what we think of and refer to as the market is changing fundamentally before our eyes.

There is still noise and haggling today, but preferences for volume and quality that exclude the subsistence farmer as a player. The market`s role may be loosely defined as facilitating a clearing price between buyers and sellers, but when it eliminates a subset of traders, we should be cognizant of the market as a sphere of influence. This is a king making phenomenon that can coerce even nation states.

Shortages and gluts moved prices in the village square but neighbors could easily banter and impress on each other for moderation in prices. The addition of warehousing and refrigeration services have redefined, perhaps made obsolete, the very idea of what we consider to be gluts while creating a high ceiling for commodity prices.

Clearly, markets have more than the price at which needs are met as their central function. It seeks to foster satisfaction and efficiency. But is this a contradiction since the needs of the buyer and seller may be different? What if the middle-men who are specialist and brokers have allegiance and conflicts of interest at odds with the principals in the transaction? It is perhaps to be anticipated that the various players in the market can exert undue influence, if not to deny a transaction, at the very least to make the markets unstable and introduce a level of volatility that cannot be dismissed as inconsequential.

Facts, fiction, breaking news, rumors, and insider trading can all move the market with its computerized trading. This is a game changer considering that initially all that moved the market was the physical presence of the product.

Now, in today`s markets the produce or commodity does not need to be present at all for the deal to be consummated. Huge corporations on one side of the atlantic make orders for sugar, cocoa, garments, electronic among other goods at wages a fraction of the selling price half way around the globe.

This can be considered a lucrative and efficient use of capital and labor resources. Indeed ingenuity as the market brings surplus labor, reduce unemployment, transform even national economies have elicited wows and allow the indisputable statistics that herald an increase in the standard of living to be admitted, even if grudgingly.

We must accept that markets have the power to transform economies and breathe hope. Yet the flip side of exploitation of workers, and collapsed buildings, improper disposal of industrial waste must also be admitted and owned. But by whom? Who owns the market, anyway? Hiccups, bubbles and irrational exuberance, as well as insufficient regulations have the potential to bring large economies to their knees, more so poorer ones.

Markets have evolved from a place to a sphere of influence. Christopher Columbus`s game changing voyages and the Bangladesh tragedy have to be celebrated and mourned as responsibilities and functions of the market.

We must be brave and courageous to admit that markets are spheres, not only to change or introduce new products and transform lives and economies, but to admit failures in how we value the inherent contributions of workers and their working conditions far away from where we use the products they make .

Glees of satisfaction or groans of despair are not divorced from the consumer on whose behalf the corporations and middle men work. The efficiency which we squeeze from the markets as we increase volume or tweak price may well be a ratio of how well the market allocates resources and reward ingenuity.

But what of the dignity of all the players? Sometimes the vision of a marketer or a producer, like a Steve Jobs may create a market where seemingly none existed and we may well say it is he who owns the market. Not true. Consumers who buys the product must keep a keen ear out for the wails on the slave ships, the burning or crumbling sweat shops and the sweet songs of the cocoa and coffee picking farmer in distant lands.

This is at the heart of what, I humbly suggest is the function of the market – to listen and determine if any cry for justice is a distortion or a cause for $ale-e-bration. ∅