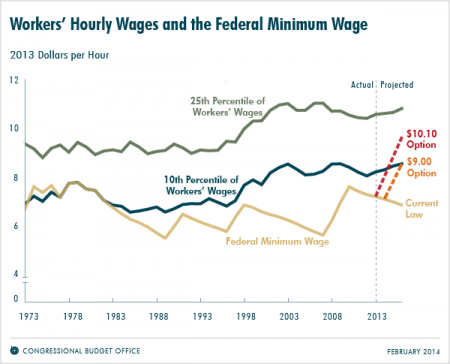 President Obama in a weekly address said, “For the first time in more than 6 years, the unemployment rate is below 6%.  Over the past four and a half years, our businesses have created more than 10 million new jobs.  That’s the longest uninterrupted stretch of private sector job creation in our history.”

He noted that while our businesses have created jobs at the fastest pace since the ‘90s, the typical family is yet to see a rise in income since the ‘90s.  He said that people still feel stifled and the numbing impact because of lack growth in wages is untenable.

“That’s why I’m going to keep pushing policies that will create more jobs faster and raise wages faster – policies like rebuilding our infrastructure, making sure women are paid fairly, and making it easier for young people to pay off their student loans,” he said.

The President argued that one of the simplest and fastest ways to start helping folks get ahead is by raising the minimum wage.

“Ask yourself: could you live on $14,500 a year?  That’s what someone working full-time on the minimum wage makes.  If they’re raising kids, that’s below the poverty line.  And that’s not right.  A hard day’s work deserves a fair day’s pay.

He further explained, “Raising the federal minimum wage to ten dollars and ten cents an hour, or ten-ten, would benefit 28 million American workers.  28 million.  And these aren’t just high schoolers on their first job.  The average worker who would benefit is 35 years old.  Most low-wage workers are women.  And that extra money would help them pay the bills and provide for their families.  It also means they’ll have more money to spend at local businesses – which grows the economy for everyone.”

The President bemoaned the fact that Congress hasn’t voted to raise the minimum wage in seven years.  “Seven years,” he emphasized.  “And when it [Congress] got a vote earlier this year, Republicans flat-out voted “no.”  That’s why, since the first time I asked Congress to give America a raise, 13 states, 21 cities and D.C. have gone around Congress to raise their workers’ wages.”

“Five more states have minimum wage initiatives on the ballot next month.  More companies are choosing to raise their workers’ wages.  A recent survey shows that a majority of small business owners support a gradual increase to ten-ten an hour, too.  And I’ve done what I can on my own by requiring federal contractors to pay their workers at least ten-ten an hour,” he added.

He later noted that a coalition of citizens – including business leaders, working moms, labor unions, and more than 65 mayors have petitioned Republicans in Congress to stop blocking a raise for millions of hard-working Americans.

“We believe that in America, nobody who works full-time should ever have to raise a family in poverty.  And I’m going to keep up this fight until we win.  Because America deserves a raise right now.  And America should forever be a place where your hard work is rewarded,” the President concluded.