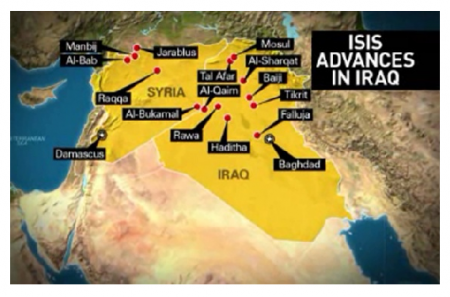 The militant group, Islamic State in Iraq and Syria (ISIS), has issued an ultimatum to Christians, warning that they must convert to Islam, pay a fine, or face “death by the sword.”

Christians have been placed under a tremendous amount of pressure since the Islamic group assumed power. Many Christians have abandoned their homes, fleeing the ISIS-controlled city of Mosul and other areas.

Notwithstanding, one of the many Christians who has decided to stay in Baghdad despite the danger is Canon Andrew White, also known as the “Vicar of Baghdad.” He is the Chaplain of St. George’s Anglican Church.

Cannon White told CNN’s Arwa Damon that by his estimate his church membership which at one time numbered 6,000 has been dramatically reduced and over the last decade about 1,200 have been killed.

He further said, “One of the things that really hurt was when one of the Christians came and said, ‘For the first time in 1,600 years, we had no church in Nineveh.”
Iraq is home to one of the world’s most ancient Christian communities, but numbers have reduced significantly over the years amid growing sectarian violence since the US-led invasion in 2003.

Recent report has indicated that up to a quarter of Iraq’s Christians are on the run after the Islamic militants captured Qaraqosh in Nineveh province, home to a large number of religious minority.

Furthermore, it is reported that as soon as the militants captured Christian township they removed the crosses from churches, burned religious manuscripts, and took control of abandoned homes owned by Christians.