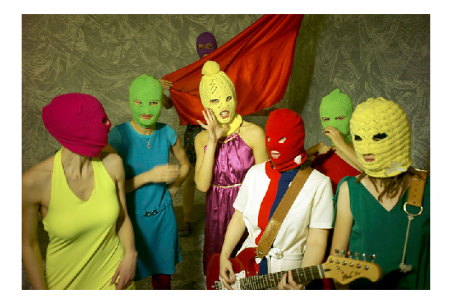 The Russian punk band, Pussy Riot, was founded in August 2011 by a group of about eleven women, ranging in age from 20 to 33, who declared themselves to be feminists.

The central themes of their punk rock music are feminism, LGBT rights, the leadership of the church, capitalism, and opposition to Russia’s President, Vladimir Putin’s policies.

The group began attracting public attention after the posting of their music videos on the Internet, portraying them wearing outrageous dresses, using obscene lyrical contents, and staging performances at locations deemed illegal.

In addition, the band ran afoul of the law on several occasions and were summoned before the courts where a charge of summary offense was imposed on them.

However, they gained prominence and mass media coverage when five members of the group, as part of their protest movement against the re-election of Vladimir Putin, entered the altar of the Cathedral of Christ the Savior of the Russian Orthodox Church in Moscow and staged a brief, albeit offensive, performance to members of the religious community.

They later used the performance along with footage of their performance at another church to create a music video entitled, “Punk Prayer – Mother of God, Chase Putin Away!”

In an interview with Lesley Stahl on CBS program 60 Minutes, one of the group members said, “Punk is a musical form where you can speak rudely, you can speak frankly, when things just outraged you to the core, you are able to swear because that expresses your true feelings.”

Now, clearly, the courts did not share this band member’s view. Following the staged performance in the Orthodox Church by five of the band members, a criminal case was opened against them.

Three of the members were soon arrested and charged with “premeditated hooliganism performed by an organized group of people motivated by religious hatred or hostility,” while the other two members went into hiding.

They were later convicted and sentenced to two years in a penal colony although one member, Yekaterina Samutsevich, was released on appeal with a two year probation.

The trial and sentence of the band members attracted extensive media attention as well as major criticism and condemnation. The general consensus is that the behavior of the band members was uncouth and boorish, and that a conviction of two years behind bars in a prison for their action is tantamount to using a hammer to kill a fly.

The Russian human rights activist, Lyudmila Alexeyeva, referred to the judgment as politically motivated and “not in line with the law, common sense or mercy.”

There has also been a huge outcry from officials and leaders from many different countries who view the punishment as disproportionate to the crime.

Many people have also argued that the crime committed by the band members should have been treated as a public disorder and punished by a fine or community service.

That said, no society can function without law, order, and a sense of public decency. The group, in its attempt to bring to the fore what they considered to be injustice within their society, just might have pushed the envelope a little too far by taking their outrage to the altar of the church.

The church as well as other religious institutions is a symbol of faith for multitudes of people; therefore, any act of desecration will be found offensive and viewed with contempt.

Pussy Riot may well have the right to protest and, of course, one can easily draw on the free speech line to invoke their rights, but one cannot escape the fact that with free speech comes responsibility.

So, yes, protest they should and an entitlement people should all have but there ought to be red lines that should not be crossed in a civil society.