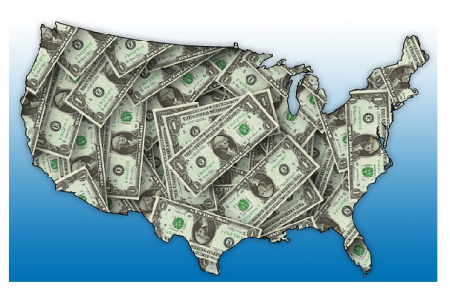 He notes that the government of the United States is in debt to the amount of about $18 trillion.

He argues that the government owes about $5 trillion of that debt technically to itself – intra-governmental debt. This includes money collected for specific purposes such as Social Security and Medicare which goes into the general fund, linked to non-transferrable treasury bonds that are issued in its place. For example, the Social Security trust funds currently have about $2.6 trillion worth of these bonds, but no cash other than what’s been collected in the last 30 days.

He explains further that while the money is technically owed to the government by the government, it’s really owed to the citizens. And while these are not the same bonds being sold in the open market, he thinks it’s a safe bet that defaulting on them would have a significant impact on the U.S. credit worthiness.

The other $13 trillion, he posits, is in the form of treasury bonds, treasury notes, savings bonds, and other forms of government issued debt.

He states that $6 trillion of that amount is held by foreign investors, banks, and creditors and accounts for this by citing U.S. Treasury figures (in billions of dollars) as at August 2014 accordingly:

Wasserman states further that the remaining amount of approximately $7 trillion is held by people and entities in the U.S. This is broken out accordingly: Federal Reserve holds about $2.5 trillion, mutual funds and pension funds hold about $1.6 trillion, state governments about $800 billion, insurance companies, $270 billion, banks $380 billion, savings bonds about $180 billion, individuals and other entities hold the rest, about $1.1 trillion.

Also he points out that state governments are in debt for another $1.2 trillion. Some percentage of that he opines should be added to the federal debt because the money is borrowed to fund federal programs.

Local governments are in debt for about $1.9 trillion.

Consumer debt is about $11.6 trillion.

Indeed, America is in debt, he concluded.