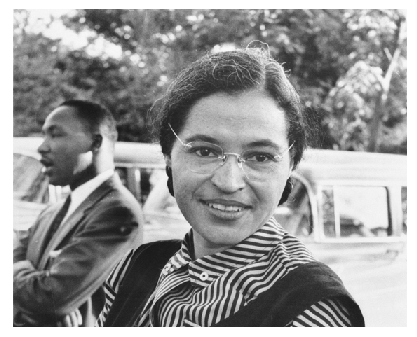 Rosa Louise McCauley Parks, the African-American Civil Rights activist, while traveling on a passenger bus, December 1, 1955, refused to give up her back seat in the colored section to a white passenger after the white section was filled.

She was subsequently arrested and all hell broke loose as it provoked the wrath of African-Americans and prompted the civil rights movement to take a more aggressive stance against discrimination.

Today, “the back of the bus” has come to mean unfair treatment.

The question that is now being asked 60 years later by not only members of the Democratic Party, but also people of goodwill is whether Loretta Lynch is being unfairly treated by the leaders of the Republican Party.

In his recent address to the nation, the President noted that one of the most important positions in the President’s Cabinet – and the national security,  law enforcement, as well as criminal justice system – is Attorney General.

He further said that he has nominated Loretta Lynch to serve as the next Attorney General of the United States, yet the Republican leaders in Congress won’t even let her nomination come up for a vote.

He said, “For 30 years, Loretta has distinguished herself as a tough, fair, and independent attorney.  As the U.S. Attorney for the Eastern District of New York, she successfully prosecuted the terrorists who plotted to bomb the Federal Reserve Bank and the New York City subway.  She helped secure billions in settlements for people wronged by some of the world’s biggest banks.  She’s been dogged in her pursuit of public corruption.  She’s jailed some of New York’s most violent and notorious mobsters and gang members.  And through it all, she’s worked closely with law enforcement and local communities to get the job done.”

The President posited that Lynch’s qualifications is not one in question as it is superb and moreover, in the past, the Senate easily confirmed her to lead one of the most prominent U.S. Attorney offices in the country – not once, but twice.

He bemoaned the fact that Lynch’s nomination has been languishing on the Senate floor for longer than the seven previous Attorneys General combined.

“Let me say that again – she will have been waiting for a simple yes-or-no vote on the Senate floor for longer than the seven previous Attorneys General combined,” the President lamented.

“No one can claim she’s unqualified.  No one’s saying she can’t do the job.  Senators from both parties say they support her.  This is purely about politics.  First, Republicans held up her nomination because they were upset about the actions I took to make our broken immigration system smarter and fairer.  Now they’re denying her a vote until they can figure out how to pass a bill on a completely unrelated issue. But they could bring her up for a yes-or-no vote at any time,” he said further.

The President reminded the Republicans of their promise of a smooth operation of Congress given their control and noted they now have a chance to prove it.

“Congress should stop playing politics with law enforcement and national security.  They should support good people in both parties who want to reform our criminal justice system.  And that means they should end the longest confirmation process for an Attorney General in three decades, and give Loretta Lynch a vote,” the President concluded.