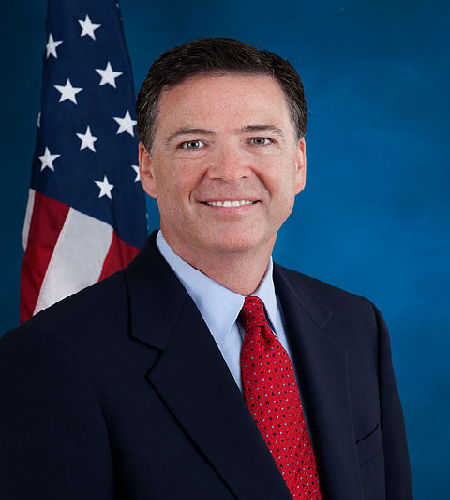 James Brien “Jim” Comey, Jr. is a 56-year-old American lawyer and currently the 7th Director of the Federal Bureau of Investigation (FBI).

Comey was a registered Republican for most of his adult life, but during Congressional testimony on July 7, 2016, he disclosed that he is no longer registered in any party.

As Deputy Attorney General, Comey was the second-highest-ranking official in the United States Department of Justice (DOJ) and ran the day-to-day operations of the Department.

Also, he was U.S. Attorney for the Southern District of New York from January 2002 to December 2003, before becoming the U.S. Deputy Attorney General.

In August 2005, Comey left the DOJ and became General Counsel and Senior Vice President of Lockheed Martin, based in Bethesda, Maryland.

In 2010, he became General Counsel at Bridgewater Associates, based in Westport, Connecticut.

In early 2013, he left Bridgewater to become a Senior Research Scholar and a Hertog Fellow on National Security Law at Columbia Law School in New York City. He served on the Board of Directors of HSBC Holdings until July 2013.In September 2013, Comey was appointed Director of the FBI by President Barack Obama.

In September 2013, Comey was appointed Director of the FBI by President Barack Obama.

Comey has had a colorful and accomplished career to date and was even touted at one point as being selected as a nominee for a federal Supreme Court justice position.

Now, on the cusp of a general election Comey has injected himself into the campaign to the extent that he could easily  turn over the White House to Donald Trump, the Republican Presidential candidate.

After being warned by senior members of the Justice Department that the sending of a letter to the Republican Congress about a further investigation into Clinton’s e-mail saga could impact the general election campaign, Comey acted without even an iota of information on whether the stash of new e-mails is classified or unclassified.

“Director Comey understood our position. He heard it from Justice leadership,” said an official, according to press reports. “It was conveyed to the FBI, and Comey made an independent decision to alert the Hill. He is operating independently of the Justice Department. And he knows it,”

In a memo explaining his decision to FBI employees soon after he sent his letter to Congress, Comey reportedly said he felt “an obligation to do so given that I testified repeatedly in recent months that our investigation was completed.”

“Of course, we don’t ordinarily tell Congress about ongoing investigations, but here I feel I also think it would be misleading to the American people were we not to supplement the record,” Comey wrote to his employees.