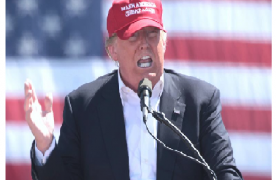 “What the hell do you have to lose?” Trump asked in his attempt to reach out to members of the black community.

“You’re living in poverty, your schools are no good, you have no jobs, 58% of your youth is unemployed — what the hell do you have to lose?”

The fact is Trump at the age of 70 years old has no record of reaching out to the African-American or minority community in any meaningful or significant way.

One could easily argue that the opposite holds true, and had it not been for the quest for power the African-American community would not even appear on Trump’s radar.

This point is underscored by the fact that after 15 months on the campaign trail Trump had not ventured into an inner city black community until a week or so ago.

In fact, in an interview on Fox News Sunday, host Chris Wallace asked Democratic Congressman Gregory Meeks whether Trump should be given any credit for trying to reach out to the black community to which his terse response was “no.”

Meeks posited, “Donald Trump is trying to put on and to, you know, in the words of Marco Rubio, con the American people, and instance, con African-Americans.  It’s — clearly, his record speaks for itself.”

That said, Trump utterances cannot be ignored, “You’re living in poverty, your schools are no good, you have no jobs, 58% of your youth is unemployed.”

The truth is both political parties — Democratic and Republican, but more so, the Democratic Party has taken minority votes for granted and for too long have used minority as political pawns to propel the Party into power.

One has witnessed time and again candidates venturing into the inner city communities imploring voters to send them to state or federal office but only to observe afterwards that their representatives do not represent their interest but that of the rich and the powerful.

Today, under the current Democratic leadership 26.2 percent of blacks now live below the poverty line, 25.5 percent of food stamp recipients are blacks and black home ownership is 47 percent and unemployment among blacks is 8.6%.

Although the foregoing situation cannot be blamed solely on the Democratic Party, it can be argued that the current leadership has not lobbied strongly or forcefully enough to make a meaningful difference in either the letter or the spirit to help the minority.