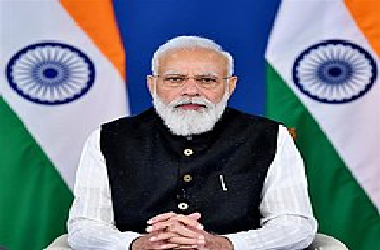 Indian Prime Minister Narendra Modi says he has decided to repeal three controversial farm laws against which farmers have protested for more than a year.

“Today I have come to tell you, the whole country, that we have decided to withdraw all three agricultural laws,” said Modi.

Political analysts have argued that Modi was upping his political ante to win votes in elections due next year.

The announcement coincides with a major Sikh festival – the religion of many protesting farmers.

“In the Parliament session starting later this month, we will complete the constitutional process to repeal these three agricultural laws,” Modi declared.

The Modi administration sought to introduce new legislation last September to deregulate the agriculture sector which farmers argued would put them at a huge disadvantage and favor big businesses.

Welcoming Modi’s announcement, farmer leader Darshan Pal said it was an “achievement of the farmers’ movement”.

“This is due to the unity of farmers, their continuous struggle and I congratulate the farming community for their unity, their struggle that they have finally won,” Pal said in a press report.

“Ultimately, after one year of struggle, in spite of 700 martyrdoms, facing repression from the BJP government, the farmers have won,” he said, referring to Modi’s governing Bharatiya Janata Party.