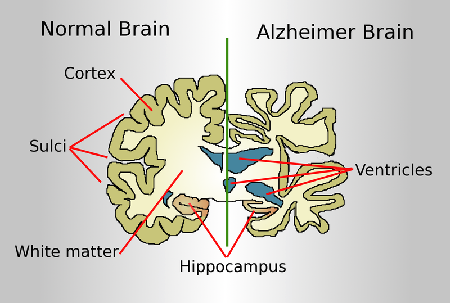 Alzheimer’s disease, a fatal form of dementia, is a public health problem.

According to cdc.gov, Alzheimer’s disease-related deaths have increased over the past 16 years in every race, sex, and ethnicity category, and will most likely continue to increase as the population continues to age.

What is Alzheimer’s disease?

The most common form of dementia which is the general term for a decline in mental ability severe enough to interfere with daily life.

A progressive disease beginning with mild memory loss possibly leading to loss of the ability to carry on a conversation and respond to the environment.

Involves parts of the brain that control thought, memory, and language.

Can seriously affect a person’s ability to carry out daily activities.

Who has Alzheimer’s disease?

Scientists do not yet fully understand what causes Alzheimer’s disease. There probably is not one single cause, but several factors that affect each person differently.

Five million Americans are estimated to be living with Alzheimer’s disease.

The symptoms of the disease usually appear after age 60, and the risk increases with age.

Younger people may get Alzheimer’s disease, but it is less common.

Deaths from Alzheimer’s disease in the United States

Alzheimer’s disease is ultimately a fatal form of dementia. It is the sixth leading cause of death in the United States, accounting for almost 4% of all deaths in 2014.

The number of Alzheimer’s deaths has increased, in part, because of a growing population of older adults.

In 2014, over 93,500 deaths across all 50 states and the District of Columbia occurred due to Alzheimer’s disease.

The number of deaths in medical facilities has declined from 15% to 7% in the same period.

The number of Alzheimer’s deaths at home has increased from 14% to 25%.

Counties with the highest death rates from Alzheimer’s were primarily in the southeast with some additional areas in the Midwest and West.

The Burden on Caregivers

The increase of Alzheimer’s deaths and those deaths occurring at home has increased the burden on caregivers. In the final stages of Alzheimer’s disease, people with the disease require constant care regardless of the setting due to declines in memory, thinking, and the ability to solve problems as well as difficulties with everyday activities like bathing, feeding, and moving around the house.

This means that both paid and unpaid (i.e. friends and family members) caregivers are likely faced with increased burden and strains.

Therefore, there is a large need for education programs, breaks for caregivers, and case management services to help caregivers. These activities, programs, and services can lessen the potential burden of caregiving and improve the care for those with Alzheimer’s disease.

What does this mean?

While there is currently no cure for Alzheimer’s disease, people should see a doctor if they experience symptoms such as memory loss affecting their daily life, difficulties with problem solving, or misplacing objects. Early diagnosis is important to allow patients and their families to begin planning for medical and caregiving needs at all stages. These findings highlight the escalating demand for in-home care and the need to prepare and provide support to caregivers.