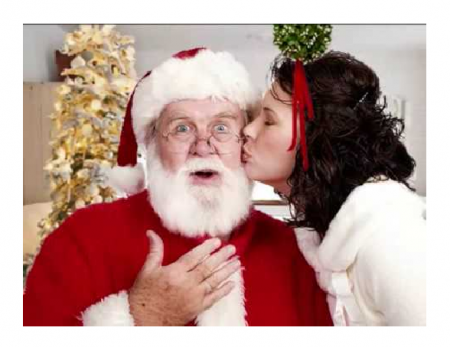 Danny crawled out of bed and went down by the fireplace. He never quite understood why his parents insisted on leaving out a glass of milk and Grandma’s famous chocolate chip walnut cookies out for a fictional character. Seriously, at the age of 9 he already knew that Santa was really Dad in a red costume and that the tooth fairy was a cheapskate.

Danny sat at the fireplace, chomped on a cookie and took a swig of milk to wash it down. He thought he heard some rustling and so he looked around. Nothing. He sat back and took another cookie. There was no way he was going to let them go to waste. Behind him, he heard a swishing noise. He turned around and saw a blur.

Danny got up and went to the tree. The presents were there, but they looked different. It wasn’t until he got closer that he saw that they were wrapped in this golden paper he had never seen before. In fact, there were quite a few presents like this.

There it was again, that jingling sound right next to the fireplace. Danny ran back. There were these black footprints on the carpet and the cookies and milk were done. He turned and looked in the kitchen to see his mother kissing Santa on the cheek. He screamed.

His mother looked shocked, at her son. She looked at Santa who nodded to her.

Just then frantic footsteps came down the stairs as Danny’s father ran to his son.

Danny looked at his father. There he was in his shorts and shirt. So, who was in the kitchen with his mother. Danny turned to the kitchen and saw it empty. He then saw his mother come down the stairs.

“Mom?” Danny looked at the kitchen and then at his Mom, who was kneeling next to his Dad.

“Honey,” she said, “Are you alright? You look like you’ve seen a ghost”

Danny mumbled something and pointed to the kitchen, then the living room.

“Dad was running late and Danny caught us in the kitchen. He had to whisk me back to the room and get back to his rounds. We had no idea Danny would be up.”

“How about we get him to ask one of his helpers to do it? They’re a lot smaller and faster.”

Danny’s mother nodded as they headed up the stairs. It had been a long night.