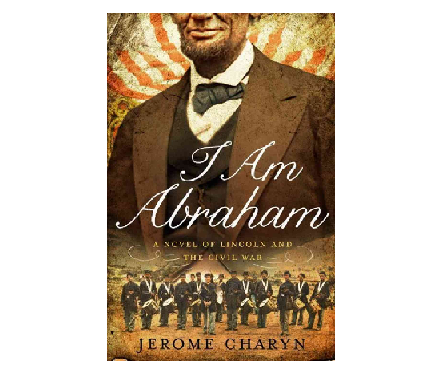 Teresa Bocanegra, in her review of the book entitled, “I am Abraham: A Novel of Lincoln and the Civil War,” applauds the work of the author and gives this book thumbs up!

Abraham Lincoln has been a subject of study for me over the last 7-8 years in both fictional and nonfictional accounts.  What a thrill for me that one of my favorite living authors, Jerome Charyn, took up the subject in the form of a brilliantly imagined novel!

Charyn begins this tale with that last night in Ford’s Theatre where we experience Lincoln’s moment of mental and physical shock upon receiving that fatal wound. We see and feel everything through Lincoln’s eyes including his depressions, failures, humiliations, successes, humor and occasional vulgarity.  We are swept into the deepest thoughts of his mind including his sexual desires.  Lincoln had an overwhelming desire for his first love Ann Ruthledge and she promised to marry him if she could be released from a previous engagement. Her death nearly killed Lincoln and led to a severe plunge into depression or for him the “blue unholies,” and a suicide watch by his friends.  It was later that he met Mary Todd, his future wife, but he never forgot Ann.  When they met, Mary was highly sought after by numerous wealthy young men; however, she was intrigued by the gangly, unsophisticated and backwoods Lincoln. Charyn walks readers through some of the turbulence of their courtship and marriage where Mary seems to lead Lincoln – Mary has high ambitions for him and her perseverance almost guarantees success.  He appears to have had the patience of a saint in dealing with her outbursts and manipulations and though she was so complicated, he was very accepting of Mary.

Some of the stories brought to life include: Lincoln’s life in Sangamon County shortly after leaving home, the Black Hawk War, his friendship with Joshua Speed, and his life on the lawyers circuit. Charyn then moves the story forward a bit and we are deep into Lincoln’s family life and political career.  The Republican nomination for president is received and the Lincoln-Douglas debates are soon under way. Lincoln makes it to the White House under Pinkerton protection, however Jefferson Davis is installed as president (down south) before Lincoln’s own inauguration.  The remainder of the novel deals with Lincoln’s personal and public life as President during the Civil War and how Lincoln ultimately maintained the Union in spite of his inner troubles, his turbulent relationships and his public battles with his own General McClellan.

There is so much substance fit into this novel that I wish Charyn’s Lincoln could now be turned into an entire series of books that reveal the exquisite detail of daily life, emotion and thought.  Charyn creates nothing but masterpieces and I would love to see him take some of the research he completed and create a novel focusing exclusively on the earliest years between Abraham and Mary – their courtship, their private talks and their quarrels.  A novel of Lincoln as a boy and teen would also be highly appreciated!