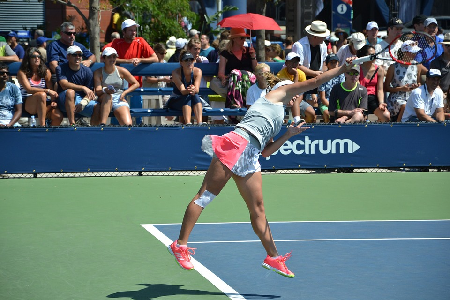 Tennis Ladders might be just what you are looking for if you have a lot of love for the game and you like to play but are perhaps tied up in other commitments.

If you are a working individual who likes to play tennis, it could be somewhat challenging to balance work demands with this social need.

Even when you opt to take the big step by joining a tennis club in your locale, your chances of getting some piece of the action could still be done a number if it so happens that club tennis matches coincide with dates that you’re supposed to be hanging out with friends and family and having a swell time.

If it does happen that you often have to pick tennis club commitments over some much-needed family time, you may start to feel unhappy at your lack of involvement. But rest easy – it is for circumstances like this that Ladders really prove their worth. And if you have plans of going pro, there is also something for you.

Ladders organize and rank players who compete against one another on a regular basis. They can be anywhere between completely formal or highly organic in terms of their organization.

Tennis Ladders make it possible for players to meet in contests called sessions. In these sessions, players or scorekeepers can keep tabs on scores as the matches progress. On completion of such matches, players rankings and statistics are updated. If you examine the scenario carefully, you may have been playing Ladders your whole life without even knowing it.

What Is A Tennis Ladder?

In simple terms, Ladders are leagues that can be set off within a club, between clubs, a city, or within an entire state. It has a pretty straightforward format. It usually involves challenges between players such that when a player below some other player in the Ladder challenges the higher-ranked player and wins, he displaces that player on the ladder.

That is, if a lower-placed player challenges you and gets beat, you will lose your position on the ladder to that player and your new position will be that of the lower ranked player. If you do come out tops in the encounter, you get to retain your position, and the challenger remains in his spot of the ladder. Suffice it to say that you will climb the ladder only when you challenge someone above you and win.

This is the general concept of the Ladder although many variations do exist – which does an excellent job of ‘spicing things up.’

Ladders are unique in that it makes for the most exciting league possible as all abilities are featured in a single league. Players of both better and worse abilities to improve their game are allowed to compete on one platform.

In some cases, male and female Ladders are formed separately, but this is not often the case. There is also the option of introducing a short-term tournament Ladder that allows for tennis Ladders to be completed in a day in a tournament format. However, these variations do not necessarily have anything to do with the unique quality of a Ladder, which is summed up in its ability to increase player participation and retention for organizers and clubs.

Benefits Of A Tennis Ladder

A tennis Ladder has numerous benefits which can do a solid to tennis participation at the club and local levels. One of such benefits is in its ability to encourage play and participation through competition.

In a typical tennis club setting, it is common for players to have a bit of light-hearted banter from time to time. This is usually marked by top ranking players lightheartedly acclaiming superiority and those further down the ladder ever-willing to take them up on their claims in challenges. It might be just a tad petty many player are not exactly cool with seeing their buddies climb above them on the ladder. This pushes them into practicing more and playing more matches until they triumph.

These days, it is quite common for technology which incorporates comprehensive ranking algorithms to be employed in keeping track of every set within a match and every match within the session to provide an unparalleled ranking and statistical support to take the game of players to the next level. It also keeps track of forfeits and no-shows and awards those who are committed to the game.

And this only means good for tennis clubs and organizers as the overall standards of tennis is bound to witness a sharp increase, which would translate to a rise in club standards.

It is not uncommon for one or two players in a tennis club to be miles ahead of the others and consequently best everyone else. But this doesn’t hold for a tennis Ladder as the only way to advance in position is by taking on the higher-ups, while also seeing off the competition below. This generally improves play standards for all competitors on the ladder as they are afforded a shot at taking on better players or players of identical abilities.

Another way in which tennis Ladders increase player participation and retention for organizers and tennis clubs is that it makes it possible for players to face players from other clubs. Such a move promotes inter-club competition while also making it possible for the top-ranking players of a particular club to face-off with other good players in better leagues – this does a good job of boosting player talent and improving performance.