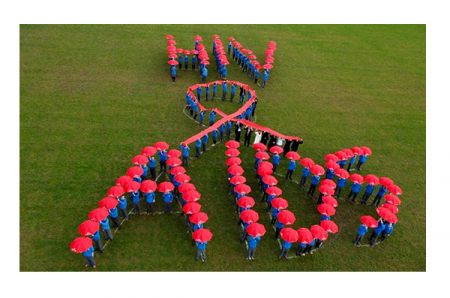 Dating can have its challenges but when you’re in a relationship with someone who’s HIV positive, there is a lot to deal with, including ignorance from others. Having a mixed status relationship, a relationship where one partner is HIV positive and the other is not, means navigating the road of romance a lot differently. In addition to being mindful about your sex life, the emotional and health issues can sometimes be heavy. There may be times of depression when your partner may feel disheartened by his status or could be dealing with the side effects of medications he has to take.

For those couples who have chosen to be together regardless of the challenges they have to face, having a family is more than just a possibility. Thanks to medical advancements, HIV is not so easy to transmit these days. In fact, during an international workshop in Toronto, scientists shared results that showed that when an HIV positive heterosexual partner has an undetectable viral load, transmission risk is virtually nonexistent. That means many mixed status couples are able to conceive children naturally.

Just 20 or 30 years ago being HIV positive meant giving up the idea of having any kind of a love life, much less children. Not only was there a great risk of transmitting the virus to the HIV negative partner and the child, but living with HIV meant only being around for a few years. Now, there is a way for HIV positive partners to have children without transmitting the virus to their mate or child.

For women with HIV, the risk of passing it on to the fetus is greatly reduced if she is on the proper antiretroviral drugs. Her mate’s sperm can be artificially inseminated with no risk to him. During delivery, the baby may be exposed to the mother’s bodily fluids and that’s why most babies are born via C-section; it reduces the exposure and subsequent risk of infection. In normal pregnancies, breastfeeding promotes bonding and provides children with nourishment they need but for an HIV positive mother, it may not be an option. Mothers are advised to use other forms of feeding including such as formula to reduce the chances of infecting their newborn.

For relationships where the man has HIV, couples can conceive safely through sex under strict guidelines. Firstly, unprotected sex must only happen when the woman is ovulating and sex during all other times must include condoms. In some cases, the woman might also take antiretroviral drugs as an added layer of protection.

The important point is that mixed status couples can have healthy children and for many living longer with HIV, that opportunity to more than just a dream come true.