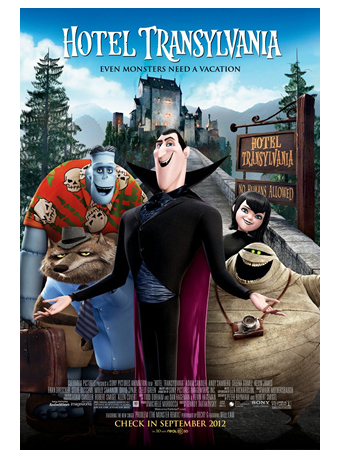 Today, some people take life way too seriously; consequently, they do not take time off to have fun, relax, or even laugh at themselves.

Now, even if animations are not your thing, you may want to change the type of movie you usually watch, if any.

Variety is the spice of life, especially if it brings you some smiles, no?

So, how about taking a break to enjoy an evening on a lighter note, just grab a large bowl of popcorn, put up your feet, let down your down hair, and exhale.

Unlike other movies, an animation movie doesn’t require one to think too hard to understand the hidden message encrypted in the scenes.

One just has to sit back and simply enjoy the good jokes and the funny graphics.

Hotel Transylvania 2 is an excellent choice if you want to see an animation film even out of mere curiosity.

The movie surrounds the plot of Dracula’s daughter Mavis (Selena Gomez) marrying her human beau Jonathan (Andy Samberg) after the approval of papa Dracula (Adam Sandler) and the world has become aware of the existence of monsters.

Nearing his fifth birthday, Dennis has yet to grow his fangs and Drac worries that his grandson might not gain vampire powers.

Noticing the dangers of Transylvania, Mavis starts to consider raising Dennis where Johnny grew up, much to Drac’s disapproval.

Mavis and Johnny were encouraged to visit in-laws in California with the view of keeping Mavis distracted.

In the meantime, Drac who is left to babysit his grandson Dennis solicits the support of his monster friends to help train Dennis to become a monster.

However, this did not pan out well, so another attempt was made through a summer boot camp; however that also failed.

Frustrated and desperate, Drac hurls Dennis from a tall, unstable tower to pressure his transformation into a bat, but rescues him at the last second.

Mavis learns of the incident via the Internet, flies immediately back to Translyvania as a bat carrying Johnny with her.

On her arrival at the hotel, she reprimands her father for endangering the life of her son and his refusal to accept the fact that the boy is only human.

Soon after, Mavis stages a party to celebrate Dennis’ fifth birthday. Vlad, her grandfather who has a dislike for humans will get to meet his great grandson for the first time at the party. At the same time, Drac tells Johnny to have the human partygoers disguise themselves as monsters.

This did not go over well as Drac later tells Vlad of the deception and confronts him about how humans are different.

Given the quarrel and uproar Dennis stealthily flees the hotel into the forest with Winnie his friend in tow.

However, they were attacked by Vlad’s monstrous bat-like servant, Bela.

Winnie gets hurt in the attack, and this provoked anger in Dennis to the extent that he instantly grows his fangs and assumes vampire abilities.

He begins to fight Bela, who calls his giant-bat minions.

Now, Drac, Mavis, Dennis, the rest of the monsters and (some of) Johnny’s family joins the fight to defeat Bela and his minions.

Bela attempts to kill Johnny in revenge with a stake, but Vlad appears with a change of heart where he shrinks his former servant to a harmless size and the Werewolf Kids drive him away.

Now, with Dennis as a half-vampire, Mavis decides to continue raising her son in Transylvania and the party resumes.