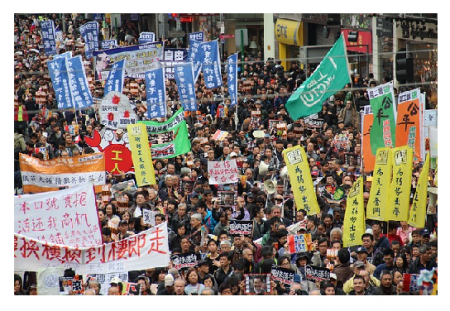 Thousands of pro-democracy protestors continue to swarm the streets of Hong Kong thus blocking vehicular traffic and closure of schools and businesses.

Despite riot police tear gas, pepper spray, baton wielding, arrests and instruction from government leaders for the protestors to disperse, the protestors continue to resist both force and directives from officials.

According to a CNN report, at least 41 people have been injured and taken to hospitals, the Hong Kong Information Services Department said Monday. A spokesman gave no details on the extent of the injuries. The department earlier said six police officers were injured, but it was unclear whether they were included in the 41 figure.

The protestors are made up of a mix of students and supporters of the Occupy Central pro-democracy movement.

They are angry at Beijing’s plans to vet candidates for Hong Kong’s 2017 leadership elections.

They want a free choice of candidates when they cast their ballots for the chief executive – something Beijing says is out of the question.