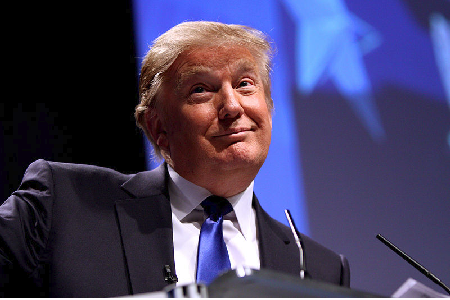 “Lying Hillary takes another low blow punch from Tall Tales Trump”. That’s the script folks, right up to the election in November.Meanwhile, Hillary’s counter with policy proposals and frustrated that Trump’s proposals are light on details, or borders on plagiarism of bedrock Democrats’ ideas and policy get scant attention.

Meanwhile, Hillary’s counter with policy proposals and frustrated that Trump’s proposals are light on details, or borders on plagiarism of bedrock Democrats’ ideas and policy get scant attention.

That’s a snapshot but a feature of this campaign so far.  It’s working for Trump. It’s not accidental. It’s a strategy.

Mr. Trump’s strategy is to pillow Hillary with low and negative blows in a contest where the usual referees, namely the media and common decency, are ineffective, aligned and bias or in retreat. Before long, the Democrats who were way ahead in the polls and seen as the only responsible option for the Presidency, are demoralized and dispirited as they watch it all slip away.

Point out that Trump’s facts are fabricated, or that he changed his position on an issue without explaining his rationale is to miss the forest for the trees. Trump’s supporters are comfortable with his creative take on reality and Mr. Trump knows that to win all you have to do is demoralize your opponent.  Inevitably, as you stare across any wide chasm, not to decide if victory or defeat is possible, begins with confidence, or separating your opponent from his or hers.

Mr. Trump is not playing by the same rules, though he is mindful of them. Hillary’s ‘basket of deplorables’ and its demerits are a cautionary tape. It ought not to be that a candidate considers his or her opponent’s supporter in a disparaging way. Even as Mr. Trump does it as an integral part of his strategy to win the Presidency, and seems to suffer no consequences, the risks for Hillary are steep.

Fact checks Mr. Trump, award him “Liar liar pants on fire!” stickers and he remains unfazed and unscarred. Why? You can only shame a man who has the capacity and the willingness to feel that constraints on his passion. Look at it this way: If a Pastor is having an affair that is electrifying his life, threatening to out him is a waste of time. He has already prepared his sermon of God’s grace and forgiveness and will invite those without sin to look at the dossier he has of their failings. In other words, the moral suasion that hitherto we had all committed to but secretly breached in some small measure is being (and has been) suspended in large part because it’s ok to demonize the President and the courtesy that the office and the nominees to the office deserve.

You would probably think this important contest should be about ideas and policy. You would be wrong. The Democrats are busy trying to get media coverage for detailed policy ideas while Trump is busy putting adjectives and adverbs to sentences without a noun and getting incredibly free press. The Democrats are now racked with doubts about Hillary’s abilities and are demoralized. It’s showing up in the polls.

What’s Hillary to do? If she coughs she is too ill to be elected. If she stumbles on a carpet she is too unsteady on her feet and that’s a sign of weakness. And if she farts? Oh my God. That’s not Presidential.
And if Trump farts? Oh, that’s gravitas.

Criticism of Trump is fools’ errand. Make fun of him. And while Hillary is making fun of Trump, she should poke fun at herself too. She has to be an equally adept performer of policy and the psychological underpinnings of the person she hopes to defeat.

Drain a man’s enthusiasm for life and you consign him to the scrapheap of defeat. We are familiar with defeat not because our hills could not be summited, but because we reacted negatively and exactly as expected to the message of our adversaries. We become complicit in our defeat. When you understand how your opponent thinks, winning is child’s play.

In a democracy political parties can get all self-righteous about themselves or be cynical about their opponents such that they feel at ease to demonize them, or worse, feel that their party is best for the country and so even as the party’s standard bearers do the unthinkable in coarsening the bonds that we depend on for our values and our identity, there is neither pause nor relent. That is a grave mistake. If winning is so important that you have to demonize the other, there is more than a hint of nakedness below the surface. Granted, if the wisdom of the voters is to be respected, or better yet directed, the Pied Piper’s magic and morals need to be appreciated before he comes to lay claims to what he is legally entitled.

A fair fight is hardly what we expect. But we expect champions of the working class to know how to handle a roast or a toast and have fun doing it.