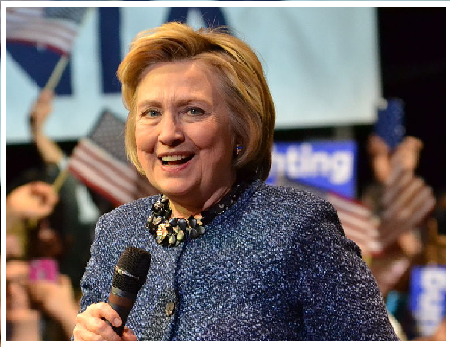 Hillary Clinton was in a no nonsense mood on Saturday as she blasted Donald Trump for a call he made to allow more guns in the classrooms.

Clinton described Trump’s utterance as “way out there” and “dangerous” and accused the GOP presumptive nominee of pandering to the gun lobby.

“Unlike Donald Trump, I will not pander to the gun lobby,” Clinton said during a keynote speech at the Trayvon Martin Foundation’s Circle of Mothers’ dinner.

“We will not be silenced and we will not be intimidated,” Clinton said after Trump was endorsed by the National Rifle Association.

“Parents, teachers, and schools should have the right to keep guns out of classrooms, just like Donald Trump does at many of his hotels, by the way,” she added.

“This is someone running to be president of the United States of America, a country facing a gun violence epidemic, and he’s talking about more guns in our schools,” continued Clinton.

Trump, during an NRA’s annual convention had earlier described Clinton as the most anti-gun candidate ever to run for office and said that she wanted to “abolish” the Second Amendment.

Clinton has not called for overturning the Second Amendment but has called for gun restrictions.

The Clinton campaign responded to the claim by accusing Trump of “peddling falsehoods” and “conspiracy theories.”

“Clinton said the country must take action to end gun violence in America.

“At long last, we must do something about the gun violence that stalks communities and terrorizes families. And this is on the minds of every one of us here tonight, as we remember all of the young people who have been lost,” Clinton said. “This problem isn’t going away.”