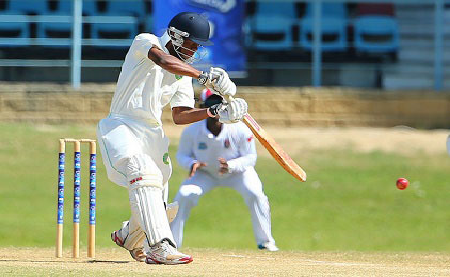 Shimron Odilon Hetmyer, the 20-year-old Guyanese and Windies cricketer is one of the youngest minted players by the Windies playing cricket at the highest level in the world today.

He hails from Berbice, a region along the Berbice River in Guyana, which was between 1627 and 1815 a colony of the Netherlands.

He had his early start playing schoolboy and club cricket and before long was selected to the West Indies’ squad for the 2014 ICC Under-19 Cricket World Cup.

The following year he was named as the captain of the West Indies squad for the 2016 Under-19 Cricket World Cup.

He acquitted himself well as a captain and batter by leading his team to victory over India in the final to take home the silverware for the first time in West Indies Under-19 cricket history.

He made his First-class debut in 2014 and was called to the highest level of service this year when he made his Test debut against Pakistan.

Although his performance across the different formats of the game has been mixed, one would be hard-pressed to find a cricket aficionado who would bet against this young player’s positive future contribution to Windies’ and world cricket.

In the meantime, Hetymyer continues to enjoy good press headlines and write-ups. Some of these include:

“The 20-year-old left-hander smashed a better than run-a-ball 119 as West Indies piled up 352 for eight at the Ian Healy Oval.”

“scoring an unbeaten 128, [Hetymer] played with freedom and real style against the old ball as Leicestershire’s attack tired in the evening session.”

“he unveiled a wide range of attacking strokes. His shot-making capacity is remarkable, almost Lara-esque.”

There is no doubt that this young man is a class act and with proper coaching, he will be a cricket batting gangster and a ball murder.

The number three is written in his star and fans now wait to see his star performance at that position.