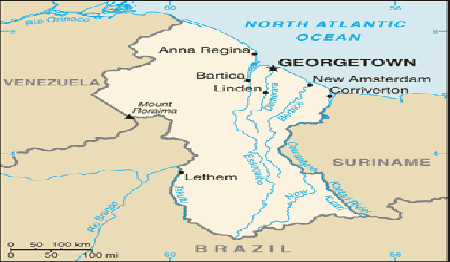 The U.S. and Britain have given Guyana their support after Venezuela’s Navy recently attempted to land a helicopter on the ship, Ramform Tethys.

The seismic research vessel was hired by ExxonMobil to gather data from the western end of the Stabroek Block in Guyana.

Venezuela has become uneasy since the US-based ExxonMobil initiated oil and gas exploration activities in Guyana in 2008.

Moreover, Venezuela long laid claim to around two-thirds of Guyanese territory from as early as 1895.

The latest standoff came when Venezuela’s navy “intercepted” a ship exploring for oil on behalf of Exxon Mobil Corp in Guyanese waters over. Venezuela, however, claimed that the incident occurred within its territory.

In the meantime, CARICOM has said it is gravely concerned about Venezuela’s incursion into Guyanese maritime space.

In a statement, it said such acts violate the sovereign rights of Guyana under international law, its entitlement to a territorial sea, exclusive economic zone and continental shelf, and pose a threat to Guyana’s economic development and national security.