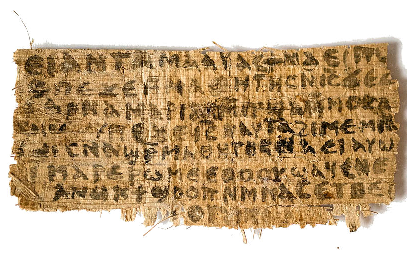 The story of the “Gospel of Jesus’ Wife” that hits the headlines recently and provoked a lot of interest, controversy, and media frenzy has now proved to be nothing but hocus pocus.

Further investigation and new information have now raised doubts about the authenticity and the origins of the scrap of papyrus fragment with the writing in Egyptian Coptic that includes the words, “Jesus said to them, ‘my wife…’’’

Ever since Harvard University professor Karen King announced the discovery of the papyrus fragment and tentatively dated it fourth century A.D., saying it may be a copy of a gospel written in the second century in Greek, it has opened the floodgate of speculations on whether Jesus was married or not.

However, the Vatican’s newspaper L’Osservatore Romano had earlier reported that the claimed gospel is a very “modern forgery.”

In addition, a number of independent scholars have since provided evidence to support the assertion of forgery, suggesting the papyrus includes textual errors identical to those made only in particular on-line modern iteration of corresponding texts.

Also, recently a careful analysis of the papyrus and the ink showed that the fragment is ancient and dates to between the sixth and nine centuries.

According to Livescience.com, the document’s current owner has insisted on remaining anonymous, and professor King has not disclosed the person’s identity; however, in a recent Harvard Theological Review article, King published a contract provided by the current anonymous owner that King said indicates it was purchased, along with five other coptic papyrus  fragments, from a man named Hans-Ulrich Laukamp in November 1999 and that Laukamp had obtained  it in 1963 from Potsdam in then-East Germany.

So, in an attempt to confirm the origins of the papyrus and discover its history Live Science.com reports that their investigation reveals that Laukamp died in 2002 and a man named Rene Ernest was named as representative of his estate in Sarasota County, Fla.

The report also indicates that Laukamp was a tool maker, had no children or living relatives, and no interest in antiquities.

Livescience.com notes further, that in the Harvard Theological review article, King noted that she also received, from the current anonymous owner, a copy of a “typed and signed letter addressed to H.U. Laukamp” that dates to July 15, 1982, from Peter Munro, a now-deceased professor at the Friere University Berlin.

Livescience.com, reports that the letter King wrote indicated that, “a colleague, Professor Fetcht, has identified one of Mr. Laukamp’s papyri as having nine lines of writing, measuring approximately 110 by 80 mm, and containing text from the Gospel of John…”

Moreover, according to Livescience.com, King noted that this document doesn’t mention the Gospel of Jesus’ wife explicitly.

However, if the feedback from close associates and friends is correct in that Laukamp never collected antiquities, the question becomes: Why and how does this document exists?