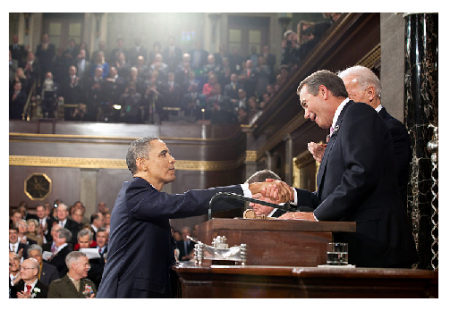 According to Wikipedia.org, the “Theory of Every Thing” “refers to the hypothetical presence of a single, all-encompassing, coherent theoretical framework of physics that fully explains and links together all physical aspects of the universe.”

Now, what accounts for the GOP’s “theory of nothing” save that of men with egos not only larger than themselves but also a thirst for power that is tantamount to a raging bull on heat.

The fact is for the more than four years since President Obama has assumed office, the Republican party has not only seek to block his every policy moves, but also has attempted to deride, berate, and belittle him every step of the way.

So, the Republicans latest temper tantrum is threats of law suits and government shutdown – didn’t we see this movie before? – because the President has pressed forward with immigration reform through executive order.

The fact is it didn’t have to come this, but for the Republicans over reach in not passing an immigration bill on the house floor. This, therefore, sets the stage for the President to act unilaterally.

American stand-up comedian and television host Bill Maher said it well,“Now that they’ve [the Republicans] wrestled his [Obama] approval rating down to the basement, and grabbed control of both houses of Congress, Republicans must explain why this guy [Obama] keeps kicking your [Republicans] ass. It’s like one of those action movies where you tie the hero up, chain him to a chair, then he headbutts you unconscious, gets up, and leaves a note signed Django.”

The truth is the President seems be now tired of the Republican’s game and one-upmanship. Consequently, he is now freeing his arms with his pen and may even be singing, the Frank Sinatra song, “And now, the end is near; And so I face the final curtain. My friend, I’ll say it clear, I’ll state my case, of which I’m certain. I’ve lived a life that’s full. I’ve traveled each and ev’ry highway; And more, much more than this, I did it my way.”

Prior to the President’s action on immigration reform, he also with the full sweep of the pen passed new measures to arrest some of the vagaries of climate change, again through executive order and much to the chagrin of the Republicans. The new act mandates that all federal agencies begin factoring “climate preparedness” and “climate resilience” into all of their international development programs and investments.

Having the Republicans against the rope in a do nothing position, President Obama called on the Federal Communications Commission to declare broadband Internet service a public utility, saying that it is essential to the economy and that the “strongest possible rules” are needed to ensure that the Internet doesn’t become divided into fast and slow lanes.

The president called for the FCC to expand its regulatory authority over the industry, a departure from the years of light regulation that the providers say has enabled them to flourish.

Now, with these actions taken by President Obama, House Speaker, John Boehner has blamed the President for a “poisoned well” but the question is who is willing to drink?