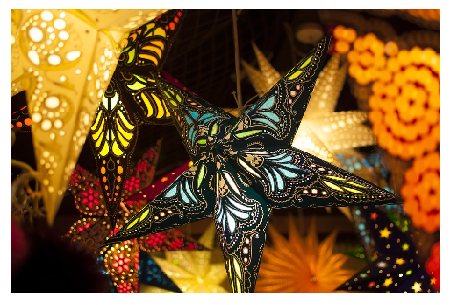 Here is what you should know:

The Filipino people refer to Christmas as Pasko, and they celebrate the season as no other country — their Christmas season extends far beyond the period of other countries.

They view the four months of the year that end with ‘ber as the Christmas months.

Their Christmas holiday season extends to January 6 (Feast of the Epiphany or Three Kings).

In the Philippines they have a parol, which is a Christmas lantern, most commonly design in the shape of a five-pointed star. The bamboo or rattan frame is covered with rice paper, tissue, or cellophane. As it is tradition, almost every family either builds or buys one to hang by the window or door.

Store owners construct giant parols and place them in stores and malls. Traditionally, a candle is placed inside for light to shine through.

The Filipinos have a special name for Christmas gifts as they refer to it as pamasko.

On December 16, this predominantly Catholic country begins a series of nine masses locally known as a ‘novena’.

The masses are part of the cherished religious tradition of Simbang Gabi, which literally means ‘night worship’.

They go to church at four o’clock in the morning and afterward have breakfast together.

A traditional drink during this season is a warm ginger tea called salabat and a traditional treat of a flat, but thick yellow rice cake called bibingka.

On Christmas Eve (Bisperas ng Pasko), a few Filipino towns commemorate Joseph and Mary’s search for a place to stay with a re-enactment called panunuluyan, a tradition very similar to the Mexican posadas.

What every Filipino looks forward to is Noche Buena, as they have a grand family dinner after the midnight mass.

Office Christmas parties are the norm starting from as early as the second week of December, or right before schools and universities go on holiday.