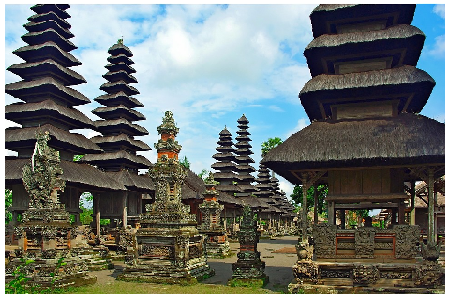 Indonesia is the world’s largest island nation spanning some 13,000 islands. The country is located in Southeast Asia, lying between the Indian and Pacific Oceans.

It has an estimated population of over 258 million people and is the world’s fourth most populous country as well as the most populous Muslim majority country.

The world’s most populous island of Java contains more than half of the country’s population.

The country boasts a rich natural heritage, a culture that’s dynamic in history and a very diverse ethnicity.

The ancient Prambanan and Borobudur temples, Toraja and Bali, with its Hindu festivities, marked some of the popular destinations for cultural tourism. The country’s well-preserved natural ecosystem with rainforests that stretch over about 57% of Indonesia’s land (225 million acres) is one of the places one should see before one’s death.

One of the two exclusively Asian species of the extant great apes native to Indonesia can be seen at the Orang Utan wildlife reserve.

Moreover, Indonesia has one of longest coastlines in the world, measuring 54,716 kilometers (33,999 mi).

The country holds 20% of the world’s coral reefs, over 3,000 different species of fish and 600 coral species, deep water trenches, volcanic sea mounts, World War II wrecks, and an endless variety of macro life —  a scuba diving heaven for both tourists and locals.

Indonesia has 8 UNESCO World Heritage Sites. These include:

It also has 18 World Heritage Sites in tentative list, some of which include the historic urban centers of Jakarta Old Town, Sawahlunto Old Coal Mining Town, Semarang Old Town, as well as Muara Takus Compound Site.

The popular heritage tourism attractions are Jakarta Old Town and the royal Javanese courts of Yogyakarta, Surakarta and the Mangkunegaran.

One can also engage in activities such as visiting museums, churches, forts and historical colonial buildings, as well as spend some nights in colonial heritage hotels.

There are excellent international and top class local restaurants where one can wine and dine at very low prices.

The local people are beautiful, friendly, courteous and polite — Indonesia a trip worth taking!