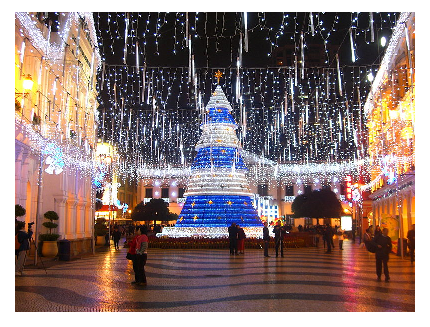 One of the advantages of globalization is it exposes people within different countries not only to new technology, products, and services but also new ideas or thoughts.

Today, China is catching on fast to the gospel of Christmas as practiced here in the West. So, the once celebrated central theme of the birth of Jesus Christ during Christmas is transformed into a commodity event of trading or what is considered to be the commercialization of Christmas.

That said, of the 1.3 billion Chinese population, only about one percent or less is Christians. Therefore, only a small percentage of the population knows anything about the meaning of Christmas.

In fact, Christmas is not an official holiday in China, so most offices, schools, and shops remain open.

For the most part, Christmas is only celebrated in the major cities and people in the rural areas have little or no clue about the meaning of the Christmas celebration.

In the large cities, one will see Christmas trees of all sizes, street decorations, Christmas lights, and trinkets of all sorts.

In major department stores, store clerks wear Santa hats and green and red accessories, also the stores are decked out with different types of Christmas trimmings and displays, similar to the trappings of any store in the U.S.

Unlike in the West where the Christmas tree is popular, in China one would mostly see Christmas trees in the stores and malls, rather than in houses.

Apart from the shopping spree during the festive season, Christmas dinners are shared with friends and families as well as the exchange of Christmas cards and inexpensive gifts.

For some outdoor activities, one can see spectacular holiday light displays and fake snow, by going to the Western theme parks in Hong Kong, such as Hong Kong Disneyland and Ocean Park.

There is also the annual WinterFest Christmas wonderland that is sponsored by Hong Kong Tourism Board.

Also, there are a number of performances, including touring productions of The Nutcracker that are often staged in major cities during the Christmas season.

Other activities in the major cities that one can indulge in are ice skating, snowboarding, and skiing.

The truth is although most Chinese ignore the religious meaning and roots of Christmas a sizable minority do head to church for services in a variety of languages, including Chinese, English, and French.

Some people also go caroling, although not many understand them.

Jingle Bells is one of the most popular Christmas songs in China.