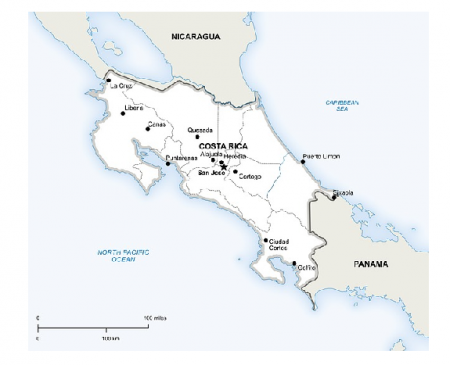 Costa Rica is a Central America country with a population of over 4 million people.

It is bordered by Nicaragua to the north, Panama to the southeast, the Pacific Ocean to the west, the Caribbean Sea to the east, and Ecuador to the south of Cocos Island.

Its capital, San José, is the center for commerce, entertainment, industry as well as the seat of the government. It is also reputed to be one of the safest and least violent cities in the region.

In 2006, the city was appointed Ibero-American Capital of Culture.

The Spaniards first visited the region over five centuries ago and gave the country its name – Costa Rica (Rich Coast).

Back then, it was thought that the country was endowed with an abundance of gold. However, like so many gold rush quest in the past by Europeans, the search for gold in Costa Rica proved futile. Today, however, the country is known to have one of the richest biodiversities in the world and is referred to as the greenest country on earth. It contains five percent of the world’s biodiversity.

Although Costa Rica’s dishes are not as spicy as some other countries in the region, it is wholesome, tasty, and simple as well as reasonably priced. The most popular food is the national dish gallo pinto. This is a mixture of fried rice and black beans. Gallo pinto is usually served for breakfast with tortillas and natilla, a thin sour cream.

In addition, there is casados, a traditional type of food that is served for lunch and dinner. A casado (which means “married” in Spanish) consists of rice, beans, and meat, and normally comes with cabbage-and-tomato salad, fried plantains, and/or tortillas.

A traditional beverage is café chorreado – coffee brewed through a cloth filter hanging in a stand often made of wood. The brew is a visitor’s delight.

The theaters in the country are beautifully designed featuring European type designed architecture along with the various musical, cultural, and artistic presentations are a major draw for tourists.

The capital, San José, is host to a number of different museums. Here, visitors are able to view Costa Rican history, scientific discoveries, pre-Columbian era culture and art, as well as modern Costa Rican art. The city is also host to the nation’s museum of gold and museum of jade.

Moreover, there are various parks and plazas where one can find gazebos, open green areas, recreational areas, lakes, fountains, statues, and sculptures by Costa Rican artists and many different bird, tree, and plant species. Costa Rica has hundreds of different beaches along its stunning Pacific and Caribbean coastlines, each with a unique draw and distinct setting. The sand among the various beaches vary from white, black, or brown coloration. Some beaches are full of shells or scattered with rocks; others are soft with fluffy fine sand. Some are fantastic for swimming, and others are better for surfing.

Some of the many beaches include Manuel Antonio, Tamarindo, Mal Pais-Santa Teresa, Puerto Viejo, Playa Portrero, and Brasilito Beach.