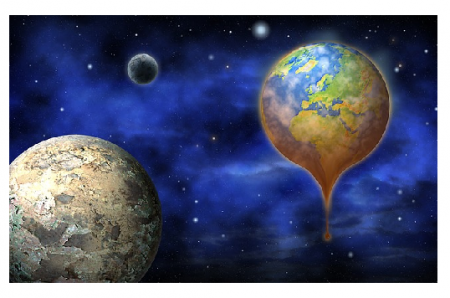 The Kyoto Protocol was my introduction to global warming, and with Al Gore, a politician whom I admired lending considerable urgency to the subject, I too was sympathetic if not a full convert. The basic argument is that human activities have generated so much carbon dioxide that the natural methods of storage and conversions have been overwhelmed, leaving excess Co2 in the atmosphere, and this is causing the planet to warm significantly with consequences too dire to contemplate.

Assuming this is mostly true, with a majority of scientists in agreement, it can be expected that natural cycles of heat and water will be changed, and with it the dependency and sufficiency of marine and land based agriculture, hydroelectric generation and shortages will make living uncomfortable, perhaps leading to conflicts between states as resources` scarcity are linked directly and indirectly to global warming and its `power` to change climates, expectations and responses to natural disasters. The seasons are scientifically documented, hurricanes are tracked as waves, time to respond is not in short supply, yet disaster management of many third world countries involves a hope for avoidance. If in the face of drought those charged with water delivery wring their hands and in the event of a sudden downpour they wring their hands, why should we believe that our lives will be any better, whether or not global warming is at work?

The facts of global warming, by way of data, may be incontrovertible, but any attitude that assumes that we are powerless to effect a change in our circumstances without fear as our motivation is unworthy of the legacy we have been bequeathed. Indeed, fear has started more wars than resource scarcity has. Man has created drought and famines directly by plunder and ethnic cleansing than a warming planet has.

I am less a convert since Kyoto, for when men can turn gold into straw, paradise into a hell, by way of divisive politics and poor governance, then appeal to global warming to further streamline policy, I am not impressed. Naturally, we are all vulnerable to significant changes to our weather, be it stress from extreme temperatures, inadequate or too much moisture and crop failures among others. That is nothing new it is the history of mankind. We build dams to harvest water and electricity, we move rivers and access underground acquifers, we build warehouses and grain silos to make the most of our harvests and our markets, and we figure ways to respond to natures fury and bounty.

The sky is never falling though the horizon fogs and the status quo is challenged by storms that are pretty much channeling heat and moisture -energy, from one place to another. We have the ingenuity and the technology to use natures` bounty and even her fury, to create abundance and sustainable progress that can make wars that are the result of anxiety, less needed.

For me, global warming is not about the data interpreted through the prism of fear and helplessness, or setting policy that denies the use of carbon based resources, for we have always, as a people with varied cultures and adaptation, been able to rise above floods and make industries out of the changes that challenge the status quo.

As we encounter arsonists in public policy, people who mean well but cannot or will not think beyond fear and helplessness, we face a future where surplus meets poverty, but the outcome is underwhelming, and migration, that timeless facilitator and response to poor governance, is set in motion. Conflicts, relatively minor, flares into wars and the productive capacities are constrained, but the culprit is not extreme changes to our weather, it is our failure to harness the productive capacities of each person irrespective of class or color. Our inability to be persuaded by the wealth of data that says investment in early and sustained education, regardless of income is more economic and efficient driver of gross domestic product (GDP) than building prisons to warehouse millions of our citizens, is worn as a badge of honor in some significant quarters.

Beyond my skepticism of the arguments that our planet is retaining too much heat, I’m prepared to ask what are we prepared to do about the problems that seem to set us against ourselves and leave some folks marginalized, leading them to think ethics subjectivity is not only too elastic, its convenience that has a price. Global warming seems to have many sovereign states planning to avoid catastrophe, by tree planting, carbon fuel reductions, wind energy addition to the electric grid and carbon dioxide sequestration, among others. I celebrate our attention to mitigating ideas that will make our environment more healthy and enhance our quality of life.

Global warming for all its converts and disciples, is not a prime number, nor a game changer. The sky is not falling, I can’t say the same about our commitment or our resolve to do the simple and immediate policy changes to build a more perfect union.