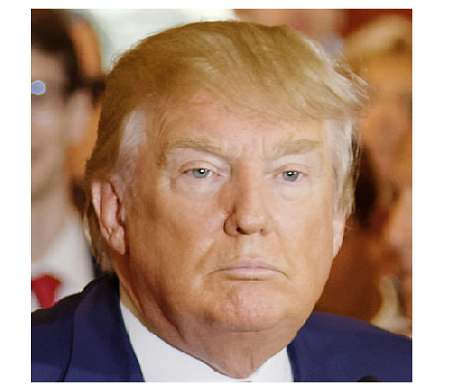 Donald Trump, the leading Republican presidential candidate, in a no hold barred statement said, “I love a safe zone for people.”

The Donald made the statement during an appearance on the popular Sunday program, CBS’s Face The Nation.

Trump parted company with Germany’s Chancellor Angela Merkel’s on her open door policy and commitment to take in some 800,000 refugees and migrants this year, including many displaced from the ongoing civil war in Syria.

He also said he would likely support a no-fly zone over Syria, and charged that President Obama is partly to be blamed for the current refugee crisis as he did not use military force after it was learned that Syrian President Bashar al Assad used chemical weapons against his own citizens.

“Well, you know, the time to have done it would have been when he drew the line in the sand,” Trump said.

In a National CBS poll out Sunday, Trump continues to hold his lead over fellow Republican Ben Carson, but by a similar smaller margin to other recent polls.

The CBS poll found that Carson was the top second choice among Trump supporters.

CBS reached 1,251 people by phone from October 4-8. The margin of error was plus or minus three percentage points.