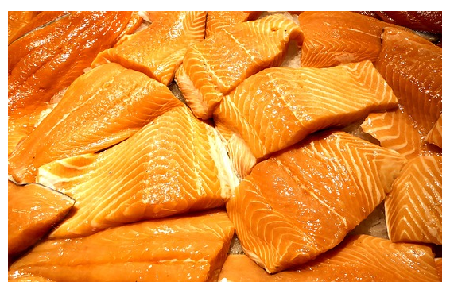 “It’s the first genetically engineered animal for food that’s been approved anywhere in the world,” Prof Helen Sang of the Roslin Institute at the University of Edinburgh reportedly, told BBC News.

After what it described as an exhaustive and rigorous scientific review, FDA has arrived at the decision that AquAdvantage salmon is as safe to eat as any non-genetically engineered (GE) Atlantic salmon and also as nutritious. The genetically modified salmon will make it the first GM animal destined for human consumption.

According to the FDA, the data demonstrated that the inserted genes remained stable over several generations of fish, that food from the GE salmon is safe to eat by humans and animals, that the genetic engineering is safe for the fish, and the salmon meets the sponsor’s claim about faster growth.

Extensive data was provided to the FDA by AquaBounty Technologies, the company behind the venture. The regulatory agency also noted that the data was peer-reviewed as part of its evaluation.

However, there has been strong objection to the product offered by some consumers who believed genetically engineered seafood should be off the table.

Concerns have also been expressed regarding the salmon escaping into the wild and the risks posed to other fishes.

“At the same time, many consumers also want to know whether their food or any ingredients in their food is derived from genetically engineered sources. Although the law does not require food containing ingredients derived from these salmon to be labeled as GE, FDA recognizes that many consumers are interested in this information, and some food manufacturers will want to make the distinction,” noted the Agency.

Dr Bernadette Dunham of the FDA’s Center for Veterinary Medicine reportedly said, “The FDA has thoroughly analysed and evaluated the data and information submitted by AquaBounty Technologies regarding AquAdvantage Salmon and determined that they have met the regulatory requirements for approval, including that food from the fish is safe to eat.”

On the other hand, the FDA said given its assessment of the environmental impact, there should be little or none on the U.S. as the multiple containment measures the company will use is land based at only two facilities in Canada and Panama.

It will not be bred or raised in the U.S.

Safety measures also include producing fish that are sterile to prevent cross breeding with wild fish “in the highly unlikely event of an escape”.

The transgenic salmon is a type of Atlantic salmon injected with a gene from Pacific Chinook salmon to make it grow faster.

Dr Ron Stotish, chief executive of AquaBounty, reportedly said the salmon was “a game-changer that brings healthy and nutritious food to consumers in an environmentally responsible manner without damaging the ocean and other marine habitats”.