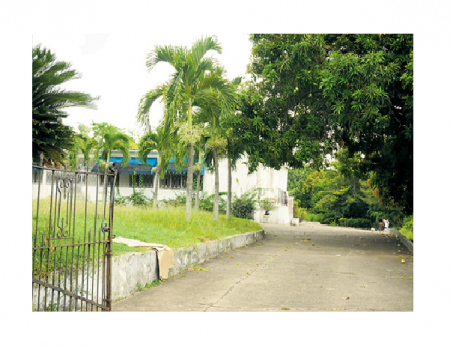 Members of the gay community were in a dilemma after a large contingent of police swooped down on the upscale Millsborough, Barbican area of St. Andrew and surrounded an abandoned house in which a group of men had been living for over a year.

Before the men could make their escape, they were herded out into the yard by policemen who were heavily armed with high-powered weapons. The group of men, none of whom seemed to be over 30 years old, were apparently all taken off their guard and surprised by the police visit.

The scene was an open spectacle as neighbors and passersby watched the police conduct their search of the building while a team of journalists and photographers interviewed and snapped pictures, respectively, as the events unfold.

Residents of the community had made several complaints to the police about the mens’ sickening behavior which includes being loud and rowdy, bathing in the driveway, stealing, and keeping the place in a filthy condition.

“They are rowdy you know, vicious, they tend to strip themselves, they dance in public, they create havoc in the New Kingston area. What I suspect is that these men, they use the umbrella of the gay community to commit wrong doing,” Christopher Murdock, the commanding officer, reportedly told the press.

The police reported that the building in which the men were staying would be demolished, after residents complained that the men have been wreaking havoc and making their life unbearable in the usually quiet neighborhood.

Further press reports also indicated that in an earlier incident a few weeks ago, a group of male prostitutes, who are associates of the homeless gay group, attacked some men who resisted their advances.

According to a Jamaica Observer report, one of the men who goes by the alias Rihanna, broke down in tears as he was told to leave the Millsborough house.

“A Maxfield mi come from and mi can’t go back there cause them a go kill me. Things come out unexpectedly and mi don’t have nowhere to go. Me have to start from scratch again.”

Some of them also informed the press that they were from various locations throughout  Jamaica but were excommunicated from their communities because of their gay lifestyle.

They also complained that going back would mean violence to their person and possibly death. Others left their homes because they were kicked out and set upon by family members.

“They should have been moved out a long time ago. They behave too badly and have been  stealing water from several homes in the community,’’ one resident reportedly said.