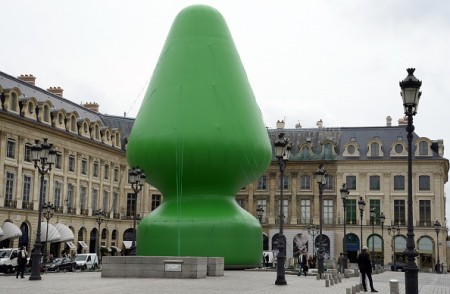 U.S. artist Paul McCarty was slapped in the face for the display of his work entitled Tree.

The man who attacked McCarthy reportedly was heard screaming that the artist is not French and that his work had “no business being on the square.”

Unhurt but shocked by the assault, McCarthy asked: “Does this kind of thing happen often in France?”

He told reporters that the art display was inspired both by a sex toy and a Christmas tree. His work depicts a huge, green, inflatable sculpture of what many described as a sex toy. The displayed sculpture stands prominently in Paris Square and has drawn a lot of attention from both tourists and locals.

Moreover, it has provoked heated discussion on social media as well as promoted a lot of humor.

The 69-year-old McCarthy has also stirred controversy in other countries where he has already had his display mounted.