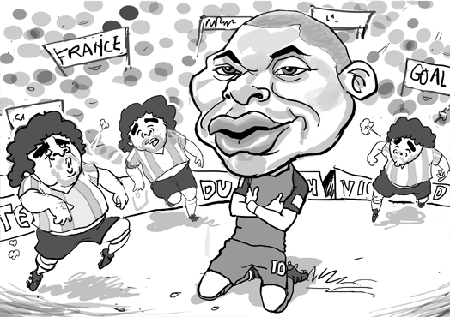 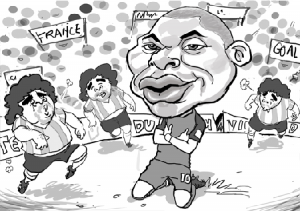 And when you make way for di Bandelero

‘Cause if you don’t do that, my friend then your number is zero

Dem lyrics snatch up like the sword of Zorro

When I buck up di yout Franco Nero

When they all sit up kick up, pon de tell up pon de, caravan stay so zero

So, it’s the greatest show on earth, and you are given the task of introducing a newly minted football star to your audience whose name is Kylian Mbappé , what would you say?

The formal approach some would take is Mr. Chairman or Madam chairperson, excellencies, distinguished guests, ladies and gentlemen, I am so pleased to be with you today and to have the chance to introduce to you our new rising star Mr. Kylian Mbappé.

Kylian Mbappé was born on the 20th of December 1998. He was born in Paris, France. His father, Wilfried, hails from Cameroon, while his mother, Fayza Lamari, is from Algeria.

Mbappé came into prominence at an early age, starring for his youth teams before making his debut professionally.

He later became a regular starter and goal scorer for his club’s first team in the 2016–17 season, helping them to gain their first hold on the Ligue 1 title in seventeen years.

The following season, he joined Paris Saint-Germain on an initial loan with a deal in place to join the club permanently at the end of the season for a fee of around US$238 million, making him the most expensive teenager and second most valuable player ever.

Mbappé made his senior international debut for France in March 2017 after previously representing them at under-17 and under-19 levels. By scoring a goal against Peru at the 2018 World Cup, he became the youngest French goalscorer at the World Cup at age 19.

Mbappé has stated that growing up he idolized Cristiano Ronaldo — Portugal’s star player reputed to be one of the best in the world.

The counter to the foregoing on the street would be, yow, did you watch the match between France and Argentina – this little 19-year-old Mbappé is ‘bad,’ a ‘ball-a-rino’, he is the best since Pele.

The fact is Mbappé is a huge football find. With his ability to run at defenses former France international Nicolas Anelka stated, “He reminds me of Ronaldo of the 1996 Olympics. He has the characteristics of a world-class player, and he must manage them properly. If he follows Ronaldo’s career, ‘O Phenomenon’, he will be one of the legends that have made history in the sport.”

Although he is only 19 years old his, performance so far in the World Cup is spellbound and has given fans and pundits reason to think France may be the team to beat in the final to lay any claims to this year’s World Cup.

He scored two goals with a blistering pace from his own half to win a penalty for the opener in France’s 4-3 victory over Argentina, a win that moves the much-touted French team into the quarter-finals.

“It was an incredible performance from a center forward who has the lot: blistering pace, goals, touch and technique,” former England captain Alan Shearer, said in a press report.

“At 19, to put in a performance like that, with millions watching and Messi at the other end, it was simply brilliant,” he added.

The truth is Mbappé’s talent, skill, quick thinking, two clever feet, a cool head, bravery, belief, and a brutal eye for goal augur well for his future in football.

There is no doubt that fans and pundits will be watching to see him in the final rounds of this World Cup and beyond!

We on this side of the pond wait with bated breath!