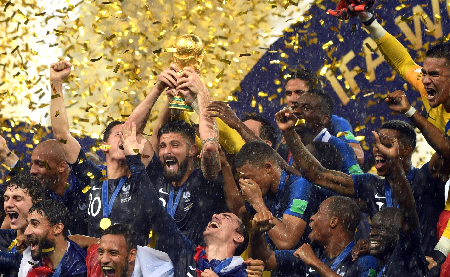 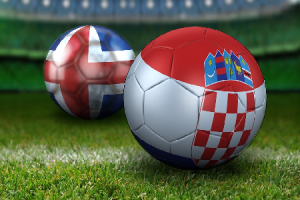 France was not prepared to sing the blues as the French men put on a commanding display to take home the 2018 World Cup after drubbing Croatia 4-2.

However, it was not like taking candy from a baby as Croatia showed a lot of grit and determination in their combat as they pushed and forced France into a defensive position time and again.

Notwithstanding, France players could not be stopped as they maxed out on all the opportunities the Croatia team afforded them.

The French national team was winning the World Cup for the second time having won the title in 1998.

Les Bleus manager Didier Deschamps was the captain in 1998 when his team shocked Brazil in Paris, and on Sunday he became the third to ever win the World Cup as a player and coach.

The match was marked with lots of thrills, spills, excitement, and just sheer joy and fun to watch football played at the highest level.

Some of the highlights from the game include Pussy Riot members invading the pitch, an own goal in the mix, 19-year-old French Mbappé could not be denied a goal, a goalkeeper gaffe and a handball penalty on offer.

And France got it done through a penalty-kick goal from Antoine Griezmann and goals from Paul Pogba and Kylian Mbappé.

This, of course, comes against a great run in the group stage and the knockout stage that featured wins over Australia, Peru, Argentina, Uruguay, and Belgium.

In his post-match interview, France’s manager Didier Deschamps said, “I had an immense privilege to live through this as a player 20 years ago, and it was in France, so it will be marked in my memory forever, but what the players did together today is just as beautiful. I have a son who is 22 years old. When we were world champions, he was too young to understand, and today there are young people who have this happiness to be able to live this event with us.”

On the other hand, Croatia’s manager, Zlatko Dalic said, “We were dignified in all our victories, and we must be dignified in defeat,” he added, “We have to respect the scoreline.”