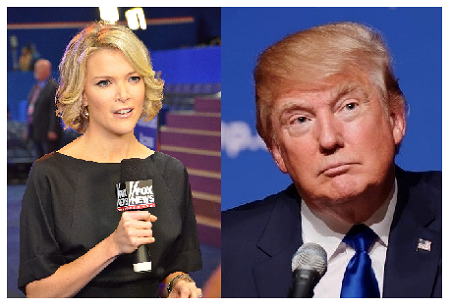 “If someone slaps you on one cheek, turn to them the other also,” Hello, don’t tell that to the Donald.

Fox News talk show host Megyn Kelly may have been back from vacation, but not from the tongue lashing of Donald Trump.

Trump’s run-in with Kelly came immediately after what Trump deemed was unfair questioning of him by her in in a GOP presidential debate.

There has been no let up since then by Trump with the latest coming in the form of a tweet in which Trump said Kelly “must have had a terrible vacation” because “she’s really off her game.”

He also retweeted a message that referred to Kelly as a bimbo.

In addition, Trump tweeted that Kelly was afraid to confront a guest, Dr. Cornel West, and that she had “no clue” on immigration.

However, many thought the dust was settled when Fox News top honcho Roger Ailes met with Trump some weeks ago to what seems then to bury the hatchet.

Trump latest tweets and utterances however have now cast doubts on whether he is ready to forgive and forget.

It has also forced Ailes to once again come out in support and defense of the network popular talk show host, Kelly.

“represents the very best of American journalism and all of us at Fox News Channel reject the crude and irresponsible attempts to suggest otherwise,” reportedly said Ailes, the Fox News chairman.

“I could not be more proud of Megyn for her professionalism and class in the face of all of Mr. Trump’s verbal assaults.”

Some of Kelly’s Fox colleagues also came to her defense. Bret Baier, who moderated the debate with Kelly and Chris Wallace, tweeted that “this needs to stop.”