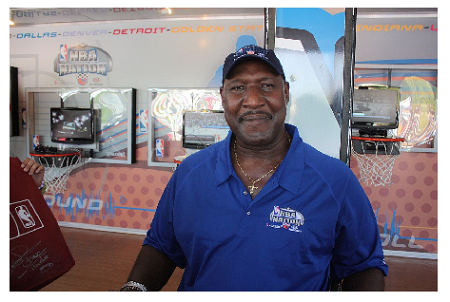 Darryl Dawkins the former American professional basketball player, died last week of at a hospital in Allentown, Pennsylvania, according to the Lehigh County coroner’s office.

Dawkins was a well-known player for the NBA’s Philadelphia 76ers and New Jersey Nets. He also played for the Detroit Pistons and Utah Jazz in the latter part of his career.

Dawkins’s family released a statement through the NBA, announcing that he died of a heart attack.

“It is with great sadness that we share the passing of our beloved husband and father, Darryl Dawkins, who succumbed today to a heart attack,” the statement reads.

“Darryl touched the hearts and spirits of so many with his big smile and personality, ferocious dunks, but more than anything, his huge, loving heart.  His family, wife Janice, children Dara, Tabitha, Nicholas and Alexis, along with countless family, friends, and fans, all mourn his loss. More than anything Darryl accomplished in his basketball career as the inimitable ‘Chocolate Thunder.’ He was most proud of his role and responsibility as a husband and father.  We ask that the public please respect our privacy as we grieve his loss.”