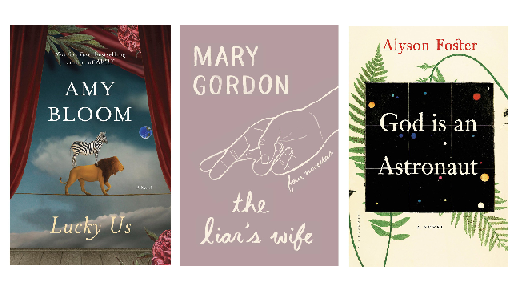 “I declare after all there is no enjoyment like reading! How much sooner one tires of anything than of a book! — When I have a house of my own, I shall be miserable if I have not an excellent library.”
― Jane Austen, Pride and Prejudice

“Never trust anyone who has not brought a book with them.”
― Lemony Snicket, Horseradish

Summer is fast coming to an end, and it’s a good time as any for one to catch up on one’s reading. These are some of the incredible books the Huffingtonpost.com recommends to wind down your summer. After the death of her lover’s wife, Mrs. Logan sees an opportunity. She scrubs their 12-year-old daughter, Eva, clean; dresses her in pink; and braids her hair. Then the two travel across Ohio to see whether newly widowed Edgar will make her an honest woman. When the proposal fails to materialize, she reverts to plan B, depositing Eva there to be raised by Edgar — a father she’s known only from sporadic visits, when he arrived bearing Lucky Strikes and Hershey bars — alongside her imperiously glamorous half-sister, Iris. “She looked like a movie star,” Eva thinks upon seeing Iris for the first time. And so the grand adventure of Lucky Us, Bloom’s kaleidoscopic take on life in the tumultuous ’40s, begins. We must prefer real hell to an imaginary paradise,” opined Simone Weil, the philosopher and mystic who fasted (and ultimately died) in solidarity with her compatriots living in Nazi-occupied Europe. In The Liar’s Wife, a pitch-perfect new work of fiction, Mary Gordon infuses Weil’s ardent, conflicted spirit into four stories that are models of compression and searing insight.

Everything I Never Told You The opening sentence of Celeste Ng’s cleverly crafted, emotionally perceptive debut, Everything I Never Told You, is characteristically unsparing: “Lydia is dead.” This stone-cold fact creates immediate tension, not least because Lydia’s parents, James and Marilyn Lee, and siblings, Nath and Hannah, don’t yet know.

A few days into the search for the missing girl, Lydia’s body is found at the bottom of a lake — a discovery that shatters the Lees and causes a series of buried truths to surface. Ng’s narrative shifts back and forth in time, revealing the discrete, hidden stories of family members and offering clues to the central mystery, producing a creeping sense of dread that belies the novel’s calm, controlled tone.

God is an Astronaut In Alyson Foster’s epistolary novel God is an Astronaut, botany professor Jess Frobisher attempts to shield her son and daughter — Jack and Corinne — from the media frenzy surrounding a shuttle explosion at Spaceco, her husband’s space tourism company. Ironically, efforts to redirect the glare of publicity only push Jess further into the limelight, as she and her husband become the subjects of a documentary about his venture. Struggling to maintain a united front as their marriage unravels; Jess handles each blow with resilience and grace. Clearly, she’s last-woman-standing material, as her humor and perspective keep her above the fray: “Two days ago Jack changed my ringtone to ‘The Imperial March’ from Star Wars…. He thinks it’s hilarious. I find the doom and gloom rather apropos.” In Smith Henderson’s Fourth of July Creek, Pete Snow is a social worker in rural northwest Montana. Poverty and its terrible side effects — violence, drugs, various strains of fanaticism — plague his clients. They are wretched and disenfranchised, victims who in turn victimize the most vulnerable: their own sons and daughters. Snow is absorbed by the nearly impossible job of finding not only clothes and food for these children, but also some — any — kind of sanctuary for them, a refuge where they won’t be battered or bartered for, shattered before they are even formed.

But Snow is a native son, too, and he hasn’t escaped scot-free. Nights, he ends up drunk and brawling alongside childhood friends. His brother has assaulted his parole officer and is on the run. His wife and 13-year-old daughter have left for Texas and are quickly spiraling downward. Then one morning, 11-year-old Benjamin Pearl appears from the woods, malnourished, filthy, dressed in rags, wild. He bites the school principal who tries to apprehend him. Snow is called to the rescue, and in the course of trying to help Benjamin, he becomes entangled in the life of the boy’s father, Jeremiah Pearl, an extreme separatist who, along with his family, lives the crudest imaginable existence, preparing for war against the U.S. government and for the Apocalypse.