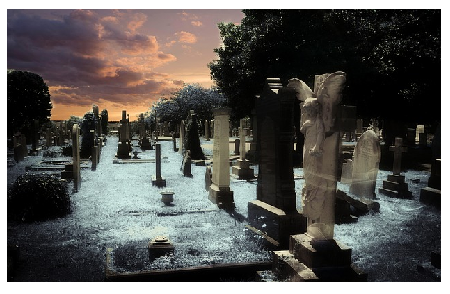 It’s very rare to find someone reflecting on the subject of the graveyard, let alone adding some ‘dead with laugh’ (dwl) humor.

However, Kenneth R. Samples, senior research scholar in thinking outside the box, posits the following in a piece on the popular website reasons.org:

This might sound morbid to some people, but I’ve always been fascinated by the subject of death. As a youth, I found funerals much more interesting than weddings. And growing up in the Roman Catholic tradition, I thought Catholic funerals were particularly remarkable ceremonies. I can still remember the unique smell of incense filling the church at the first funeral mass I ever attended. My wife would tell you that I still enjoy visiting cemeteries—especially national or military memorial parks. In a cemetery, I feel singularly alone with my thoughts. As a philosopher, I have always hoped that by reflecting upon death’s inevitability and imminence, I might gain a deeper and more insightful perspective on living life. I suppose I have also hoped that by keeping the inescapability of my death in the front of my mind that my fear of it would lessen. Yet, when I endured a life-threatening illness 12 years ago, I definitely experienced the one-of-a-kind fear and dread that comes from anticipating one’s death.

As a college instructor, I taught the philosophy class “Perspectives on Death and Dying” for several years. The textbook I used on thanatology (the study of death and dying) revealed that many people avoid thinking about death. In fact, the text stated that some people actually think that if they don’t think about death or in any way acknowledge it, then it may not happen to them.1 Now that is the perfect example of wishful thinking! As my former boss and apologetics mentor Walter Martin used to say, “The real death rate is one per person.”

A Little Humor from the Graveyard

While I take the topic of death quite seriously, that doesn’t mean I can’t also make jokes about it. Along with being a philosopher, I’ve always thought of myself as something of an existential comedian. One of my many jobs while working my way through college was digging graves for one summer in 1986. Here are my ten reasons for leaving that laborious, earthy profession: