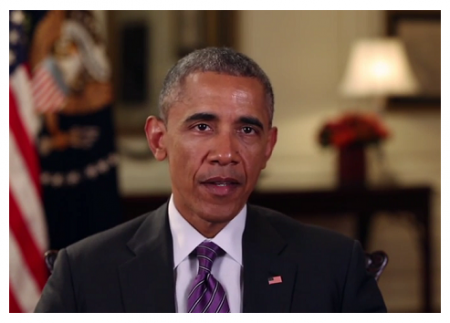 President Obama, in his weekly address, noted that new trade deals are important to American values as well as vital to middle-class economics

“The idea that this country does best when everyone gets their fair shot, everyone does their fair share, and everyone plays by the same set of rules,” said the President.

“These are simple values. They’re American values. And we strive to make sure our own economy lives up to them, especially after a financial crisis brought about by recklessness and greed. But we also live in a world where our workers have to compete on a global scale. Right now, on an uneven playing field. Where the rules are different. And that’s why America has to write the rules of the global economy — so that our workers can compete on a level playing field,” he continued.

The President said he understood why a lot of people are skeptical of trade deals. Past deals, he argued, did not always live up to the hype , or include the kind of protections his administration is fighting for today.

“We have lessons to learn from the past — and we have learned them. But trying to stop a global economy at our shores isn’t one of those lessons. We can’t surrender to the future — because we are meant to win the future. If America doesn’t shape the rules of the global economy today, to benefit our workers, while our economy is in a position of new global strength, then China will write those rules. I’ve seen towns where manufacturing collapsed, plants closed down, and jobs dried up. And I refuse to accept that for our workers. Because I know when the playing field is level, nobody can beat us,” he explained.

He stated that when he took office his administration started thinking about how to revamp trade in a way that actually works for working Americans.

He posited that his administration have engaged in a new trade partnership through negotiating in the Asia-Pacific — home to the world’s fastest-growing markets.

He indicated that this is the highest-standard trade agreement in history.

“It’s got strong provisions for workers and the environment — provisions that, unlike in past agreements, are actually enforceable. If you want in, you have to meet these standards. If you don’t, then you’re out. Once you’re a part of this partnership, if you violate your responsibilities, there are actually consequences. And because it would include Canada and Mexico, it fixes a lot of what was wrong with NAFTA, too,” he said further.

He argued that this is not a race to the bottom for lower wages and working conditions, but trade agreements that will drive a race to the top.

“We’re making sure American workers can retool through training programs and community colleges, and use new skills to transition into new jobs,” he delared.

The President concluded that if he didn’t think this was the right thing to do for working families, he wouldn’t be fighting for it.

“We’ve spent the past six years trying to rescue the economy, retool the auto industry, and revitalize American manufacturing. And if there were ever an agreement that undercut that progress, or hurt those workers, I wouldn’t sign it. My entire presidency is about helping working families recover from recession and rebuild for the future. As long as I’m President, that’s what I’ll keep fighting to do,” he said.