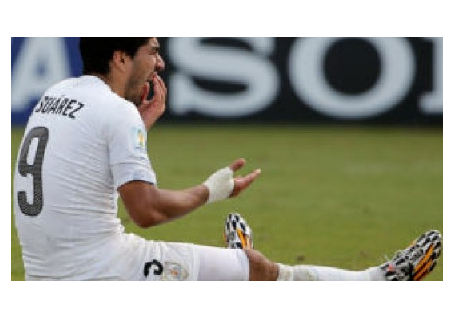 The International Federation of Football Associations, FIFA, has announced it has opened investigations into the alleged biting incident by Uruguay’s Luiz Suarez on Italy’s Giorgi Chiellini in the World Cup Group D match on Tuesday.

FIFA’s disciplinary committee has opened the investigations into Suarez’ action, and if found guilty of assaulting an opponent, faces a minimum ban of 2 matches up to a maximum 24 months suspension.

FIFA has instructed the panel to present evidence by 5p.m. Wednesday June 25, 2014, because a decision has to be reached beforeSaturday when Uruguay is set to play Colombia in the round of 16 match.

The referee Marco Rodriquez of Mexico had a great game but missed the incident.

FIFA’s longest ban has been 8-matches on Italy’s Mauro Tassotti for breaking the nose of Luiz Enriques of Spain.  This is the third biting offence for Suarez,  and the FIFA disciplinary code allows for action to be taken in these circumstances via video evidence even if the referee had seen the incident.