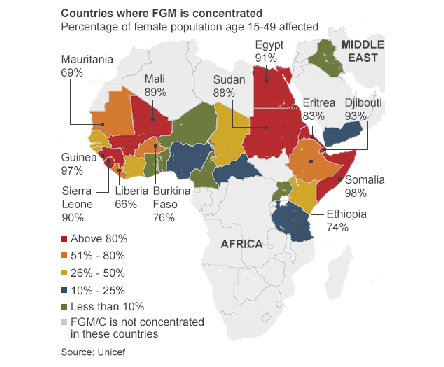 The Sunni Islamist group — Isis which is in control of the Iraqi city of Mosul has reportedly issued an edict that all females aged between 11 and 46 must undergo the procedure of female genital mutilation (FGM).

“This is not the will of Iraqi people, or the women of of Iraq in these vulnerable areas covered by the terrorists,” she added.

The radical Islamist group Isis has assigned itself the status of the one and only caliphate. It also claims religious authority over all Muslims and aims to bring much of the Muslim-inhabited regions of the world under its direct political control.

The ritual of cutting girls’ genitals is practiced by some African, Middle Eastern and Asian communities in the belief it prepares them for adulthood and marriage.

Worldwide, more than 130 million girls and women have undergone FGM and more than 700 million women alive today were children when they were married.

FGM is recognized internationally as a violation of the human rights of girls and women. The UN General Assembly approved a resolution in December 2012 calling for all members states to ban the practice.

FGM poses many health risks to women, including severe bleeding, problems urinating, infections, infertility as well as complications in childbirth and increased risk of newborn deaths.

The Isis militant group captured Iraq’s second largest city, in June, and have since taken over areas of the north-west and closed in on cities near Baghdad.

They also forced Christians out of the city with the threat of convert, leave or be killed.