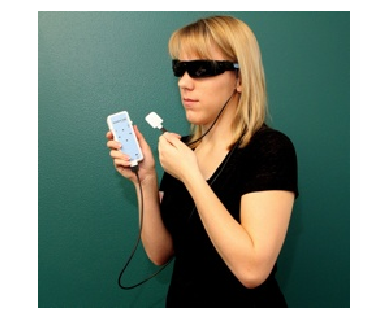 The Food and Drug Administration in a press release has given the nod to Wisconsin company Wicab, Inc., the right to market a new device that when used along with other assistive devices, like a cane or guide dog, can help orient people who are blind by helping them process visual images with their tongues.

The BrainPort V100 is a battery-powered device that includes a video camera mounted on a pair of glasses and a small, flat intra-oral device containing a series of electrodes that the user holds against their tongue. Software converts the image captured by the video camera in to electrical signals that are then sent to the intra-oral device and perceived as vibrations or tingling on the user’s tongue.

With training and experience, the user learns to interpret the signals to determine the location, position, size, and shape of objects and to determine if objects are moving or stationary.

“Medical device innovations like this have the potential to help millions of people,” said William Maisel, M.D., M.P.H., deputy director for science and chief scientist in the FDA’s Center for Devices and Radiological Health. “It is important we continue advancing device technology to help blind Americans live better, more independent lives.”

According to the National Eye Institute (NEI), in 2010 more than 1.2 million people in the United States were blind. NEI projects that number of Americans who are blind will rise to 2.1 million by 2030 and 4.1 million by 2050.

The FDA reviewed the data for the BrainPortV100 through the de novo premarket review pathway, a regulatory pathway for some low- to moderate-risk medical devices that are not substantially equivalent to an already legally-marketed device.

Clinical data supporting the safety and effectiveness of the BrainPort V100 included several assessments, such as object recognition and word identification, as well as oral health exams to determine risks associated with holding the intra-oral device in the mouth. Studies showed that 69 percent of the 74 subjects who completed one year of training with the device were successful at the object recognition test. Some patients reported burning, stinging or metallic taste associated with the intra-oral device. There were no serious device-related adverse events.