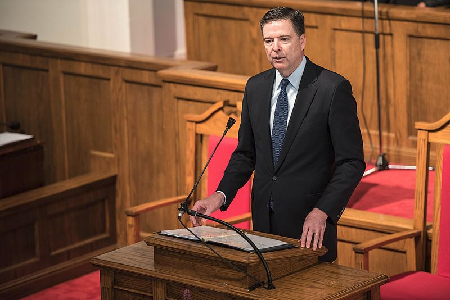 The latest review of the much touted new treasure trove of Hillary Clinton’s e-mail has turned up nothing and the director of the FBI James Comey has told Congress that there are no charges to be made against her.

Earlier, Comey had put the Democratic campaign in a free fall with a brief letter to Congress announcing that the bureau had discovered a new set of emails that may have implications in its investigations. However, nine days after sending shock waves in the presidential race a new letter has been sent to congress which reportedly said that agents “have been working around the clock to process and review” the emails, which had been found on a computer owned by former Rep. Anthony Weiner, the estranged husband of Clinton’s close aide, Huma Abedin.

“During that process, we have reviewed all of the communications that were to or from Hillary Clinton while she was Secretary of State,” Comey wrote.

“Based on our review, we have not changed our conclusions that we expressed in July with respect to Secretary Clinton.”

In July, Comey sharply criticized Clinton for being “careless” in handling classified materials but said there was no basis for bringing any criminal charge against her.

“We were always confident nothing would cause the July decision to be revisited,” he said in a tweet. “Now, director Comey has confirmed it.”

In the meanwhile, Clinton’s campaign communications director Jennifer Palmieri reportedly said, “We have seen Director Comey’s latest letter to the Hill. We were glad to see that he has found, as we were confident that he would, that he has confirmed the conclusions he reached in July. We are glad that this matter is resolved.”