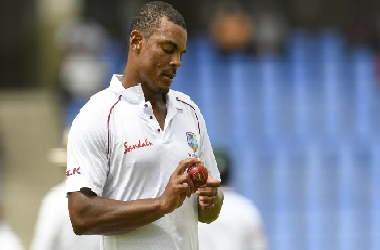 Shannon Gabriel has reclaimed his position in the 15-member West Indies Test Squad after recovery from an ankle injury and a sterling performance in the two inter-squad warm-up matches in Manchester.

A veteran of 45 Tests since his debut at Lords in 2012, Gabriel is among the ‘men of speed’ who will go to ‘war’ against England in a three-match Test series, starting July 8 at Ageas Bowl, Southampton.

Gabriel, the tall six-footer, sturdy, and powerfully built Windies paceman, has been outstanding in the last three years and is presently in the top 20 of the ICC ranking in the longest format of the game.

The 32-year-old Gabriel is one of the most experienced members of the squad.

“After being away from the game so long, almost six or seven months, you are kind of hungry to get back on the field. I am looking forward to the warm-up games, and we will take it from there. I have played a few Test matches before, so I know how to prepare,” Gabriel said in an earlier report, via video conference.

His career-best match figures of 13 for 121 — third-best in West Indies history came against Sri Lanka in Saint Lucia two years ago.

The pacer took 5/59 in the first innings, and in the second inning, he was on the rampage with a record-breaking 8/62 in the 2nd innings.

Fast forward to today, “The last time I played (for West Indies) was the India series (last September) in Jamaica. I want to play. I want to be ready to play against England. I am fully motivated. If you are playing for your country and you are not motivated, you really should be on the field. This is not about half-hearted. You have to be all in,” the pacer said.

And Roger Harper, Cricket West Indies Lead Selector has also reposed a lot of confidence in Gabriel being included in the Test squad.

“I am delighted that we are able to add Shannon to the Test squad. He has shown that he is fit and ready; he will add experience, firepower, and potency to the bowling unit,” said Harper.

West Indies will travel from Manchester to Southampton on Friday as they continue preparations in a bid to retain the Wisden Trophy in the #RaiseTheBat Test Series.

The first Test will be played at the Ageas Bowl, starting Wednesday, July 8.

The first ball daily is 11 am (6 am Eastern Caribbean Time/5 am Jamaica Time).