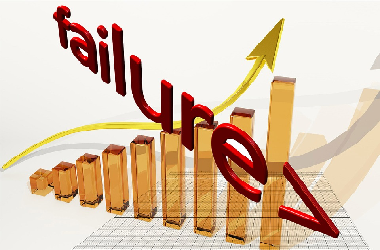 If failure keeps you in God’s will, how is that not a good thing?

The question presumes success would have wrestled you out of God’s will. It’s an interesting way to flip the script and give failure a standing ovation instead of a kick, for, after all, it has saved you from a fate worse than death. Except, failure, not recognized for what it is, is a death to be repeated with increasing desolation.

I am not saying any particular failure is or isn’t the will of God. Rather, I am saying failure is generally a consequential gap in our understanding and execution of our affairs. It usually involves some error impatient of correction. Everyone can decide what they will believe and accept. Failure shouldn’t be something to get comfortable with.

The takeaway from this is not so much a person’s response when confronted with failure but his responsibility to all concerned when failure is on the horizon or at our doors.

Let us consider this scenario: a student is kept back in grade for academic reasons while his peers move on. Beyond his personal disappointment at the school’s decision, what would be the failure, his promotion, or his teachers’ assessment not faithfully done?

At the heart of our failures resides incompetence or lack of mastery of subjects and situations. Indiscipline factors in as well. Look at from this perspective, failure is not so much a thing or event though we itemize and enumerate each “what went wrong,” but our approach concerning making decisions doesn’t recognize the problem as internal rather than external. So instead of seeing “us giving the thing problems,” which is fixable, we see it as the thing giving us problems.

Does it matter how you see failure? It does. One way gives you control and resolve; the other lay blame or even excuses it by saying, “It wasn’t God’s will.”

Failure can be like a shoe broken by bad habits. It becomes misshapen, uncomfortable, and ill-suited to high aspirations and efficient contributions to society.

At some point, our feet not only deserve better, they demand it, or we will feel uncomfortable in our own unfulfillment, as it should be. We have to listen and respond not so much from our pain or fears but some spark in ourselves that tells us we are better than the failures we endured and continue to endure faithfully ad infinitum. Enduring failure, especially repeatedly, is not OK!

So what are we to do about failure, including the self-congratulatory messages that tell us that if not for the failures, we would’ve strayed outside of the will of God? That’s Kool-Aid with much dregs, to put it mildly.

As lost as we may be in our views and conditioning, consoling ourselves with failure as success should be a wake-up call. It is not God’s will to trap us in failure. Rather, failure is a call to action, to change how we see things, to inquire of God and ourselves the how and why of things, and most importantly, what is our responsibility when confronted with failure.

As much as we would like to think success is assured or even elementary, it is not. Indeed, failure is rooted in our psychology from the conditioning not the conditions we face. To rid ourselves of our affinity or faithfulness to failure requires us to embrace processes, habits, protocols, and the discipline that will enable us to build good, safe bridges that reunite us with our confidence and the blessings God has always had and continues to have in store for us. In this, we can always be confident.