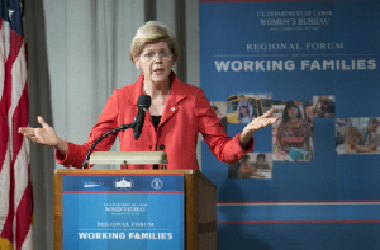 Speaking on CBS’s Face the Nation program with host Margaret Brennan, the Senator said Democrats win when they identify with the masses.

She channeled the inability of the ninety-nine percent to cope with today’s high cost of living.

She noted that the Biden administration needs to do right by the people by delivering on the promise made during the election.

In answering the question posed on student loans, she noted that “the president has the authority to cancel student loan debt and the best way we know that is because President Obama did it, President Trump did it, and President Biden has now done it repeatedly.”

She underscored the point that cancellation of student loan debt is “what tens of millions of people of need.”

She noted the charge of debt cancellation being inflationary was balderdash.

“No, it is not inflationary. Not paying student loans has been baked in for three years now. But keep in mind, as President Biden himself says, the way we deal with inflation is not by making people poorer. The way we deal with inflation is we attack high prices head on, price gouging. We straighten out the supply chain so goods can come into people. We attack it head on, not by trying to make people poorer. Canceling student loan debt is something that would be good for people all across this country and more importantly, good for our economy overall,” she said.

She posited that giant companies should not be allowed to engage in price gouging, and although everyone was not on board the Build Back Better agenda, negotiations will continue.

Senator Warren said the Democrats still have time to deliver the goods Americans are for from the party.

Additionally, she said that even without a Franklin Roosevelt majority, her party could get things done as not everything needs to pass through Congress, for example, attacking corruption.