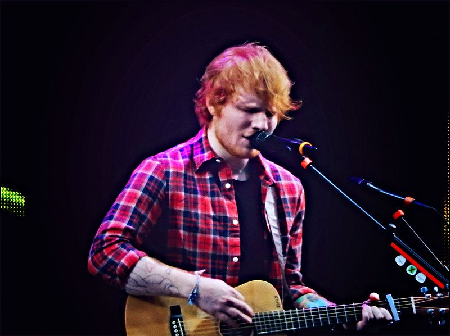 Edward Christopher Sheeran, the 27-year-old singer, songwriter, producer, and actor continues his hit songs run and most recently his third album, ‘÷’ (pronounced “divide”), which was released in March 2017 is now dubbed the most-requested album on Amazon’s voice-activated speakers.

The album debuted at number one in the UK, the US, and other major markets.

The first two singles from the album, “Shape of You” and “Castle on the Hill”, were released in January 2017 and broke records in several countries, including the UK, Australia, and Germany, by debuting in the top two positions of the charts.

He also became the first artist to have two songs debut in the US top 10 in the same week.

By March 2017, Sheeran had accumulated ten top 10 singles from ‘÷’ on the UK Singles Chart, breaking the record for most top 10 UK singles from one album.

His fourth single from ‘÷’, “Perfect”, reached number one in the UK (Christmas number one), Australia, and in the US.

Hit records by George Ezra, Adele, and Dua Lipa also feature in the Top 50, which was released to coincide with National Album Day.

Just eight of Alexa’s top 50 albums were released this year, and only two of those were debuts – Cardi B’s Invasion of Privacy and Anne-Marie’s Speak Your Mind.