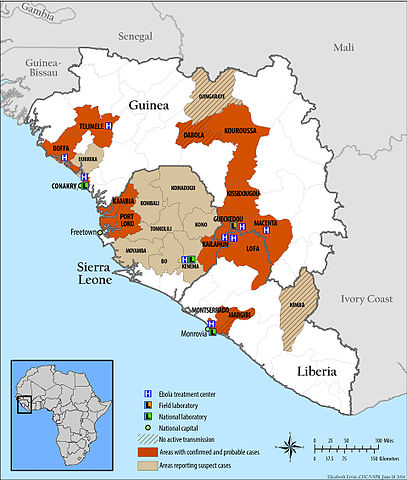 According to  WHO, the emergence of an Ebola virus disease outbreak in West Africa in 2014 has become a challenge to the 3 countries involved, as the Governments of Guinea, Liberia and Sierra Leone work intensively with WHO and other partners to ramp up a series of measures to control the outbreak.

Since March 2014, more than 600 cases of Ebola and over 390 deaths have been reported in Guinea, Liberia and Sierra Leone. While the number of suspected, probable and confirmed cases and deaths changes rapidly, the outbreak is causing concern among health authorities because the deadly disease is being transmitted in communities and in health-care settings, and it has appeared in cities as well as rural and border areas. The disease, which causes severe hemorrhaging and can kill up to 90% of those infected, is spread by direct contact with the blood and body fluids of infected animals or people.

WHO, the Global Alert and Response Network (GOARN), and its partners are providing guidance and support and have deployed teams of experts to West African countries and to WHO’s African Regional Office in Brazzaville, Congo.

WHO to convene regional experts for comprehensive operational response

Recognizing that a coordinated regional response is essential, WHO is convening the leading health authorities from the affected and nearby countries in Accra, Ghana on July 2–3, to agree on a comprehensive operational response to control the Ebola outbreak. A wide range of partners have been invited, and Ministries of Health of Guinea, Liberia, and Sierra Leone will report on their preventive and control measures, contact identification and tracing; case management; infection and prevention control; social mobilization; and situation reports.

The countries are working to bring supportive care to the ill, inform affected communities of recommended practices, trace contacts of infected patients, control infections in health care settings, and taking other measures to control the outbreak. Despite their progress in implementing preventive and control measures, health authorities still face challenges in curbing the spread of the outbreak, and will discuss these at the Accra meeting.

The latest numbers, which change as cases are discovered, investigated, or discarded, are: